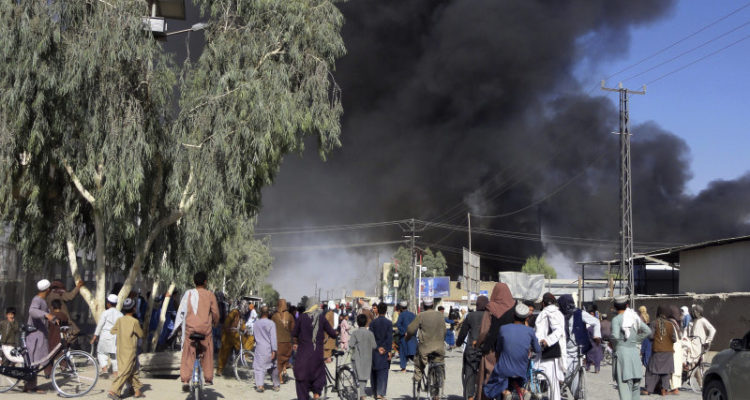 Smoke rises after fighting between the Taliban and Afghan security personnel, in Kandahar, south-west of Kabul. (AP)

Washington: When Joe Biden appeared at the White House last month to explain his decision to withdraw US troops from Afghanistan, he insisted that a Taliban takeover of the country was not inevitable.

The Afghan army, Biden said, had 300,000 troops compared to 75,000 for the Taliban. And he claimed that the Afghan government troops were as “well-equipped as any army in the world”.

While few things in life are inevitable, a speedy Taliban takeover following America’s withdrawal looked highly possible even then.

Now, with the Taliban gaining control of provincial capitals at stunning speed, it looks extremely probable.

According to a US intelligence assessment, the Taliban may control Kabul within a month. The security situation is so dire that thousands of US troops have been flown in to evacuate American diplomats and civilians. The world’s strongest military power has been reduced to asking the Taliban not to kill its citizens as they flee from the country.

It’s a chaotic, ignominious end to a 20-year war that has cost America more than $US800 billion ($1 trillion) and the lives of more than 2300 US troops. Rather than a considered departure, America’s departure resembles a Vietnam-style surrender.

It’s a demoralising moment, and another blow to American prestige following the disaster of the Iraq War, the global financial crisis and the botched response to the coronavirus.

Read the article by Matthew Knott in The Age.