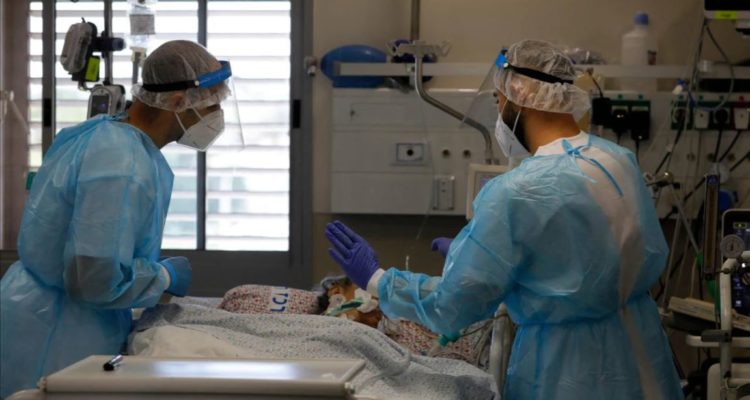 Israeli medics tend a Covid-19 patient at the Ziv Medical Centre in the city of Safed. (AFP)

Israel mandates Covid tests for kids as young as three

Israel is to require Covid-19 tests from next week for children as young as three to enter schools, swimming pools, hotels or gyms, as infections from the Delta variant surge despite extensive adult vaccinations.

Israel already required children aged 12 and over to show a green pass, reintroduced late last month showing a person’s vaccination and testing status and whether they had recovered from Covid.

Prime Minister Naftali Bennett said from next Wednesday the state would fund unlimited tests for children aged three to 11.

The Magen David Adom emergency service said it had opened 120 rapid antigen testing centres nationwide. Screening at these stations costs 52 shekels ($22) and allows those tested to obtain a green pass valid for 24 hours.

Late on Thursday, Mr Bennett announced that Israel was also lowering the age limit for its campaign of booster vaccinations from 60 to 50 years old.

“The campaign to vaccinate the population aged 60 and over is a great success … It is an important step in the fight against the Delta variant and I now call on everyone over the age of 50 to come line up tomorrow (Friday) morning to get vaccinated,” the Israeli Prime Minister said.

The booster vaccinations offered by Israel and some other countries have drawn criticism from the World Health Organisation, which has said the global priority should be providing the standard inoculation to all.