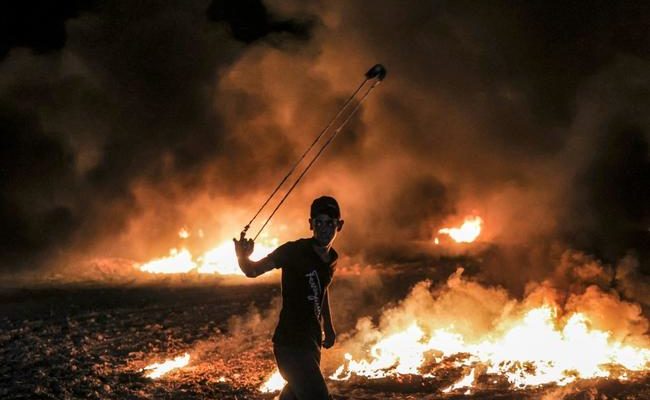 The Israeli air force attacked two sites in Gaza on Sunday, the army said, after Gazans clashed with forces on the border and launched incendiary balloons into southern Israel.

Israeli “fighter jets struck a Hamas military compound used for manufacturing weapons and training as well as an entrance to a terror tunnel adjacent to Jabalia,” the Israeli army said.

The army said both incidents were “examples of how Hamas continues to employ terror tactics and target civilians.”

Speaking in Washington, where he had met with US President Joe Biden, Israeli Prime Minister Naftali Bennett said he held Gaza’s Islamist rulers Hamas responsible for any unrest from the Palestinian enclave.

“As far as I’m concerned, the address (of those responsible) has been and remains Hamas.”

Protests erupted later in the day, with the Israeli army firing tear gas and stun grenades as Palestinians burned tyres on the border between Gaza and Israel, an AFP reporter said.

Earlier Saturday, Gazans laid to rest Omar Hassan Abu al-Nile, 12, who died of his wounds a week after being shot by Israeli forces during border clashes.

The often-violent weekly demonstrations backed by Hamas sputtered as Israel killed some 350 Palestinians in the territory over more than a year.