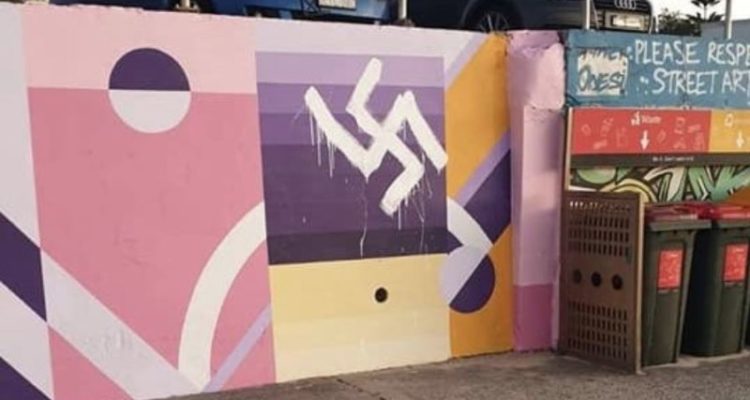 A swastika was painted over a mural along Bondi Beach’s promenade in 2019. (AJN)

NSW Labor is planning to introduce legislation banning public display of Nazi symbols, following a similar move in Victoria as the threat of right-wing extremism grows.

NSW Police have given evidence in a parliamentary budget estimates hearing that right-wing extremists now occupy about 20 per cent of counter-terrorism efforts, adding to operations targeting the radical Islamist threats that remain of greatest concern to investigators.

Of 1000 extremists across four tiers attracting some level of police monitoring about 80, on the two highest levels, are being closely tracked as posing a violent threat to people in NSW.

The people on the database are a mixture of ideological and religious extremists and changes in their circumstances or activities can trigger increased attention from investigators.

NSW Police Commissioner Mick Fuller told the hearing that right-wing extremism had grown over the last five years – although less significantly in NSW than other parts of Australia – and had surged during the COVID-19 pandemic.

“We have seen a greater number of people come in from the periphery of that environment to engage in conversation and to engage in what I would say [is] undesirable behaviour. However, at a point when we think that will result in violence, we interdict,” he said.