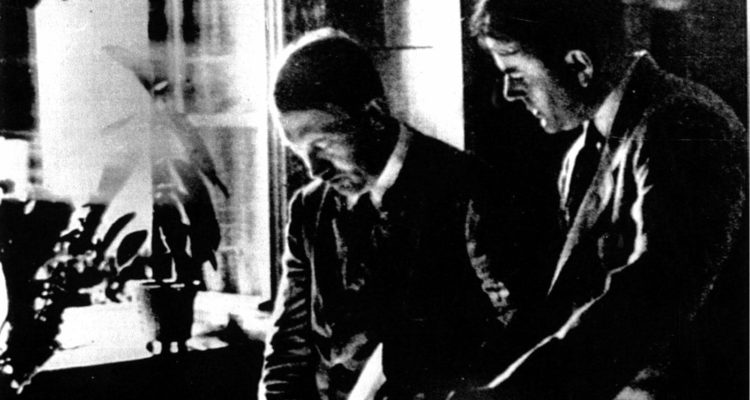 Nazi leader Adolf Hitler with his assistant Albert Speer at Obersalzburg, Germany in a 1934. Picture: Heinrich Hoffman from 'Inside the Third Reich: Memoirs'

Hitler’s favourite architect Albert Speer argued for decades that he knew nothing of the Holocaust, but a recently discovered letter tells another story.

Fritz Todt was unlucky. On February 8, 1942, as he readied to leave Adolf Hitler’s Wolf’s Lair in East Prussia to return to Berlin, after a meeting with the Fuhrer the previous evening, he was surprised to find that fellow Third Reich insider Albert Speer, who was to travel with him, had decided to sleep in.

Speer was lucky. A rising star among Hitler’s henchmen, he had apparently disagreed with the pessimistic Todt the night before when the older man told an incandescent Hitler the prospects of defeating Russia were grim.

Todt’s Heinkel He-111 set off for the 700km flight home, but at the end of the airfield, and at just 30m altitude, the remodelled one-time bomber blew up, killing all on board.

Germany had invaded Russia eight months earlier, and Todt told his boss that he had taken on too much. A construction engineer who built his country’s famed autobahn system and the legendary Siegfried Line, 630km of fixed fortifications to protect Germany from attack, Todt was in charge of all armaments manufacturing.

He knew better than anyone that production could not keep up with demand but, in any case, he had recently radically streamlined management of the deadly business to help matters.

In a shock appointment, within hours of the crash, Hitler gave Speer all Todt’s responsibilities. His rise from favoured Nazi architect to the second-most powerful man in the country had been extraordinary. His predecessor’s death remains a mystery.