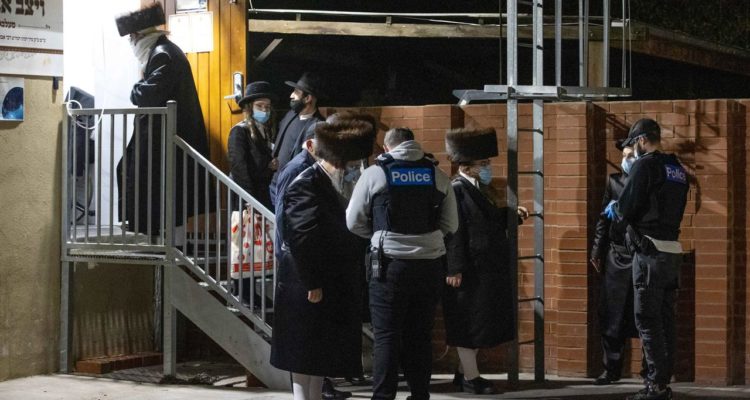 People outside the synagogue. (Mark Stewart)

Worshippers who attended a Ripponlea synagogue and defied police orders to leave, will cop hefty fines for breaching Covid restrictions.

Police surrounded an ultra-Orthodox synagogue in Ripponlea and fenced off the front entrance on Tuesday night as up to 100 worshippers refused to leave the temple.

Chanting supporters gathered around the Glen Eira ­Avenue synagogue as worshippers were finally cleared by police through two exits around 9pm. It was not immediately known if any arrests were made.

About a dozen police had converged on the synagogue on Tuesday as part of an investigation into an alleged breach of coronavirus public health orders during the Jewish ­religious holidays.

Two worshippers were seen climbing on the roof of a nearby building just after 6pm on Tuesday, while another group confronted police accusing them of anti-Semitism.

Victoria Police issued a statement on Tuesday night, confirming they had spoken to a number of people who attended the synagogue.

“All adults who attended will be issued with a $5452 fine. A number of children who were present will not be fined,” a police spokesperson said.

“Investigators believe a number of other people were present and are yet to be spoken to by police. Investigators are working to identify them.”

Read the article by Mitch Ryan, Mitch Clarke and Miles Proust in the Herald Sun.