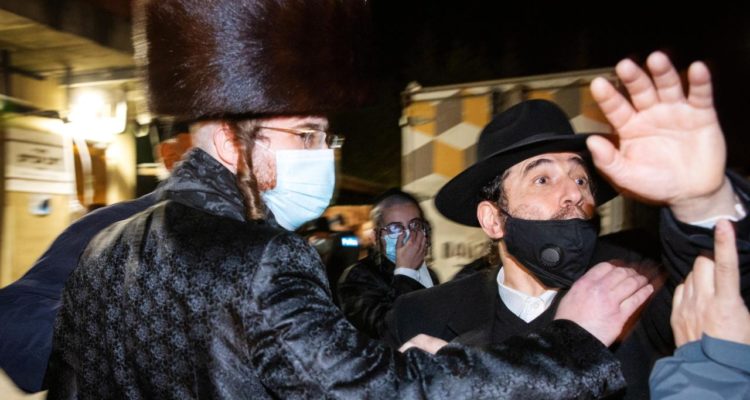 Tensions flared between worshippers and the media. (Mark Stewart)

An ultra-Orthodox splinter group at the centre of ugly clashes with police was warned against Covid-19 rule breaches more than a year ago, emails show.

Exclusive: An ultra-Orthodox splinter group at the centre of ugly clashes with police this week was warned against Covid-19 rule breaches more than a year ago, explosive emails reveal.

The Satmar community group in Ripponlea claimed they were still allowed to meet because they had permission from Prime Minister Scott Morrison.

However, according to a Federal MP that so-called free pass was only based on a chat with a receptionist at Parliament House, who later confirmed to the MP that no such advice was given.

Motty Fixler, the figurehead of the Satmar group, was then warned to stop the minyans, prayer gatherings of 10 people at a time.

But tensions flared this week when up to 30 people gathered to celebrate Jewish New Year or Rosh Hashanah at a synagogue on Glen Eira Road.

Police have fined 11 people so far, but warned their investigation was continuing.

The ugly scenes outside the Satmar synagogue in Melbourne’s inner-east has angered the wider Jewish community which has been closely following Covid-19 rules.

Some in the community have rejected claims that the group did not know the rules.