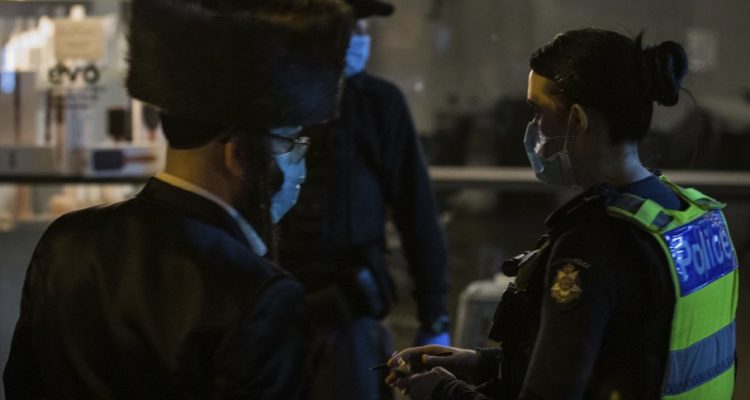 Members of Victoria Police take down the details of people outside the illegal gathering. (Darrian Traynor)

The scenes were confronting and, for the children involved, no doubt frightening.

As a group of ultra-Orthodox Jewish men and boys left a Ripponlea synagogue, they were surrounded by journalists, camera crews and police. Jostling broke out. Punches were thrown. A cameraman was later hospitalised with concussion.

Bizarre footage later emerged of Jewish men in traditional dress creeping along nearby rooftops in an apparent attempt to evade detection.

While the overwhelming majority of Melbourne’s Jewish community celebrated at home, breaking bread with their families over Zoom, police surrounded a building on Glen Eira Road after being tipped off that a group of worshippers had gathered inside in contravention of Victoria’s lockdown rules.

It was not the first time. Some ultra-Orthodox Jewish worshippers – many from the strictly conservative Satmar sect – have been gathering in numbers during lockdowns since March last year, to the frustration of police, Victoria’s Department of Health and the wider Jewish community.

A Health Department spokesperson said the department had made numerous attempts through intermediaries in other orthodox communities to engage with the group concerned.

“Engagement has so far been unsuccessful and [the department] is now looking at other options.”

Read the articl by Biana Hall in The Age.