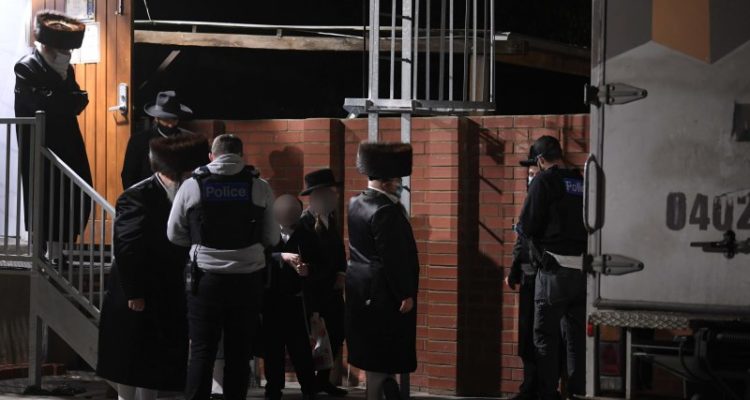 Police take details from people outside the synagogue on Tuesday night. (Eddie Jim)

Four ultra-Orthodox Jewish worshippers who attended an illegal gathering in Melbourne’s inner south this week have been fined, while another man has been charged over the alleged assault of a news cameraman.

A 72-year-old St Kilda man was charged with recklessly causing injury and unlawful assault over an incident police allege took place outside a property on Glen Eira Road about 7pm on Tuesday.

The man was issued with a $5452 fine for breaching the Chief Health Officer directions and will appear at Melbourne Magistrates Court on February 21.

The cameraman told the ABC the alleged assault was unprovoked and that members of the media were following police direction.

“We were all placed exactly where we were asked to be, weren’t approaching anyone,” he said. “When I was attacked I was approached so, yeah, it was a surprise.”

The fresh enforcement action comes as video footage circulates on social media of two men scaling the roof of the Ripponlea synagogue and appearing to enter the building through a manhole.

A police spokeswoman confirmed that 11 people in total had each received fines of $5452 after the gathering to celebrate Rosh Hashanah, the Jewish new year.

“Victoria Police will continue to investigate the incident and will issue infringement notices to adults who attended the illegal gathering,” the police spokeswoman said.

Several members of the congregation fled over adjoining rooftops, as police waited for worshippers to leave the Glen Eira Road building about 8.20pm on Tuesday.