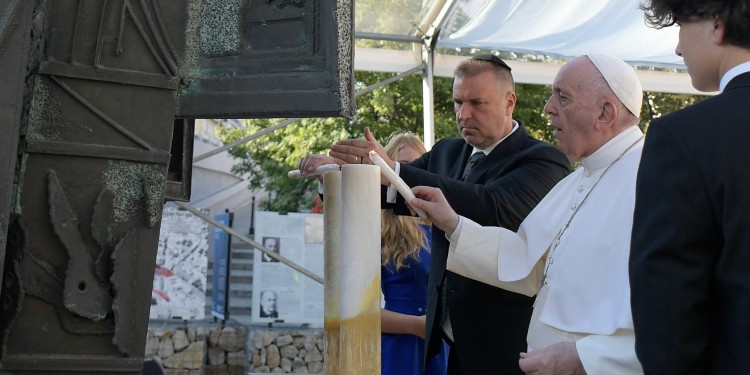 Horrors of Holocaust must not be forgotten, Francis tells Slovak Jews

THE violence of the Holocaust and the atrocities committed against the Jewish people are tantamount to blasphemy, Pope Francis said during his visit to the Slovakian capital Bratislava.

“The divine name, the Lord himself, is blasphemed whenever the unique and distinctive dignity of the human person, created in his image, is violated,” the pope said at a meeting with members of Slovakia’s Jewish community.

The meeting took place in Rybné námestie Square, site of a memorial tribute to the 105,000 Slovak Jews who were killed in the Holocaust.

The memorial includes a black wall with an etching of the Neolog synagogue that once stood in the square before it was destroyed by communist authorities in 1969 to make way for a bridge.

A bronze abstract sculpture topped with the Star of David with the word “Remember,” inscribed in Hebrew and Slovak, stands at the center of the square.

Daniel Feldmar, a 19-year-old member of the Jewish community in Bratislava, said he saw Pope Francis’ visit not only as an acknowledgment of “the tragedies of the Holocaust but also to acknowledge that the Jewish presence in Bratislava and in Slovakia is still strong.”

“I am so happy that a person who is considered to be holy in the Christian religion decided to come and walk through the parts where this synagogue once used to be,” he said.

Read the article in The Catholic Leader (CNS).