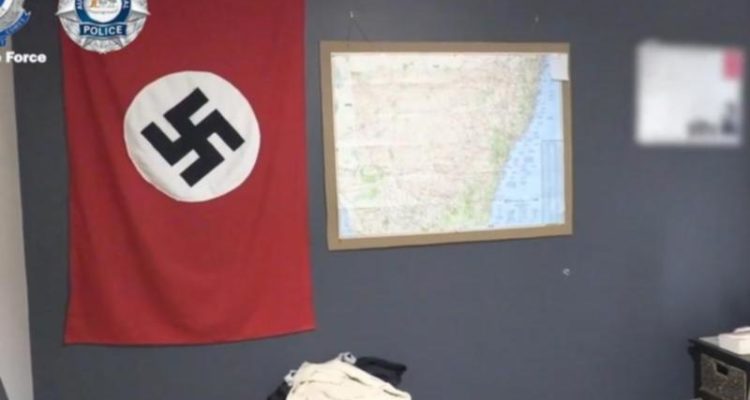 A NSW man arrested for importing firearm components had a Nazi flag hanging at his home. (AAP)

A central NSW man with the Nazi flag and a map of the state on his bedroom wall has been arrested by counter-terrorism police over a plan to make a 3D gun.

The 26-year-old will face a Dubbo magistrate on Monday charged with breaching the firearms act, following his arrest in Orange on Friday.

His home was searched by counter-terrorism police after a brief investigation into the importation of firearm components by an alleged supporter of ideologically motivated violent extremism.

A search of his phone allegedly uncovered a digital blueprint to manufacture a firearm – an offence carrying a maximum of 14 years in prison.

The investigation began less than two weeks ago, when customs officers found a firearm component inside a package addressed to the Orange man.

The man has allegedly been importing “legally obtained items” since mid-2020 with the view to manufacturing firearms, police said on Monday.

“The Joint Counter Terrorism Team acted early to prevent him manufacturing a firearm, even though he allegedly made significant preparations to be able to do so,” Australian Federal Police’s counter-terrorism commander, Stephen Dametto, said in a statement.

The JCCT combines officers from the AFP and NSW police with investigators in spy agency ASIO and the NSW Crime Commission.

Read the article by Luke Costin in Perth Now.