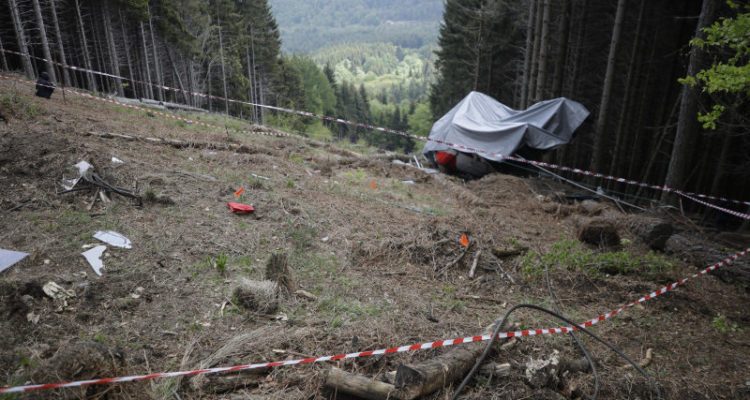 The wreckage of a cable car after it collapsed near the summit of the Stresa-Mottarone line in the Piedmont region, northern Italy in May. (AP)

Jerusalem: Israeli police have questioned a suspect over the alleged kidnapping of a six-year-old boy who was the only survivor of an Italian cable car disaster and is now at the centre of a custody battle.

Eitan Biran’s parents, younger brother and 11 other people all died when a gondola plunged to the ground in northern Italy in May.

The boy then moved in with his paternal aunt, Aya Biran, in northern Italy. On Saturday his maternal grandfather, Shmuel Peleg, picked him up for a planned family trip but they never returned, the aunt told reporters.

Italian media said they had driven across the nearby border to Switzerland and flown on a private jet to Tel Aviv.

In a statement, Israeli police said they had received a complaint that a minor had been kidnapped and flown to Israel, and had questioned a 58-year-old man on Tuesday on suspicion of involvement.

The statement did not identify the suspect, who was released under restrictions. Israeli media reports said the grandfather had been questioned.

Earlier in the day, the boy’s family in Italy filed a petition in a Tel Aviv family court for his return. Their Israeli lawyer, Shmuel Moran, said the court had set a hearing for September 29. It is required to make a ruling within six weeks.