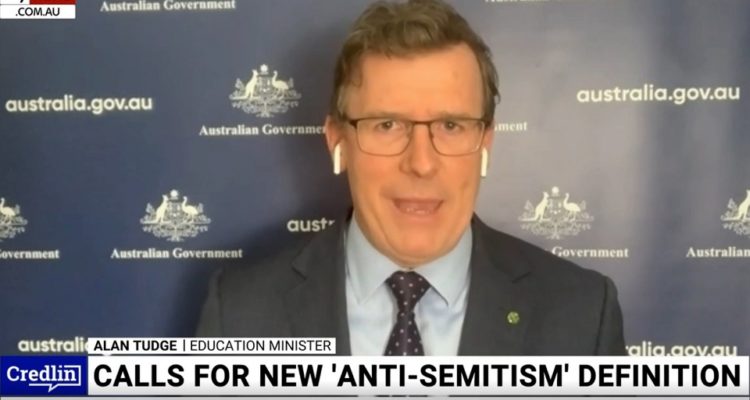 Between 2013 and 2017, there were almost 700 incidents of anti-Semitism across Australia. Disturbingly, the problem’s getting worst, with Jewish groups reporting a sharp uptick in anti-Semitic violence and threats on university campuses in the broader community. Enter Education Minister Alan Tudge. He’s calling for the Federal Government to endorse a new definition of anti-Semitism to make it easier for police to identify anti-Semitic incidents and to bring those responsible to justice. Alan Tudge joins me now.

Minister, explain to viewers at home, if you wouldn’t mind, what this new definition is, and why, if we do endorse it, you believe it’s going to help end the scourge of anti-Semitism in Australia?

G’day, Peta, this is an international definition, which has been agreed by many countries and of course, this definition includes the traditional forms of anti-Semitism such as calling for the killing of Jews or making fun of Jewish people because of what they look like. It also includes other forms of anti-Semitism, such as holding an individual responsible for the actions of Israeli Government, for example, or for equating the actions of the Israeli government today with that of Nazi Germany back in the ’30s and ‘40s. This international definition is important. I think if we adopt it as a policy position in Australia. It provides that guidance for institutions and particularly our universities, to be able to call out core behaviour when they see it. It’s never going to stop anti-Semitism altogether. Anti-Semitism’s been going on for thousands of years. But it can make a difference, particularly in some of the anti-Semitism from the Left where we’ve seen very significant increases in recent times.

Read the transcript of interview of Alan Tudge MP by Peta Credlin and watch the interview on Sky News.