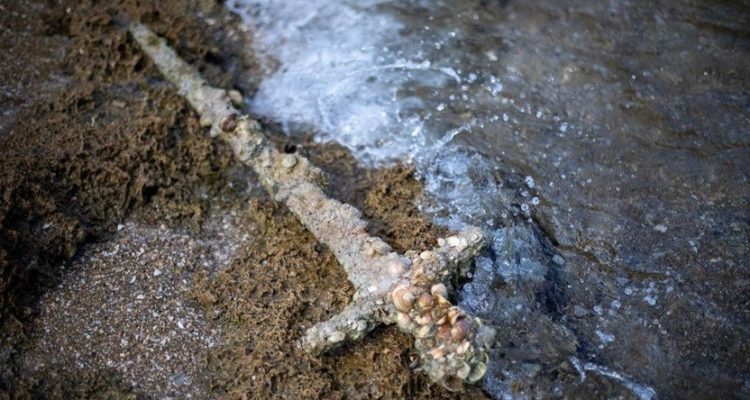 The 0.91 m-long sword on display in the Mediterranean seaport of Cesarea, Israel. (Ariel Schalit, AP)

An amateur scuba diver out for a weekend swim has found an impressive iron sword dating back to the time of the Crusades.

Israeli scuba diver Shlomi Katzin found the sword near Haifa, Israel, on Saturday, October 16, according to a statement put out by Israel’s Antiquities Authority on its Facebook page. As the Associated Press reports, Katzin was roughly 150 metres from shore and swimming at a depth of 5 metres when he noticed a trove of artifacts strewn across the ocean floor, including anchors, pottery fragments, and perhaps best of all, a 0.91 m-long sword with a 30 cm hilt.

Worried that shifting sands might re-bury the sword, Katzin brought the ancient artefact to shore and contacted local experts.

“The iron sword has been preserved in perfect condition and is a beautiful and rare find,” Nir Distelfeld, Inspector for the Israel Antiquities Authority’s Robbery Prevention Unit, said in the statement. “It evidently belonged to a Crusader knight. It is exciting to encounter such a personal object, taking you 900 years back in time to a different era, with knights, armour, and swords.”

The Crusades began in the late 11th century, as Christians from Europe sought to wrest control of Jerusalem and other parts of the Holy Land from Islamic rule. These religious wars, in part a reaction to previous centuries of Muslim expansion in the Middle East and Europe, lasted until 1291 CE.

Read the article by George Dvorsky in Gizmodo.