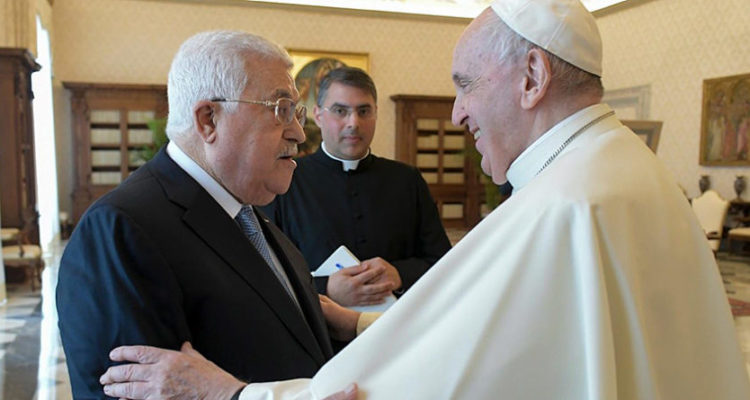 Pope Francis holds a private audience with Mahmoud Abbas, President of the State of Palestine, and discusses the need for direct dialogue between Palestine and Israel to achieve a two-state solution.

The Holy See Press Office announced on Thursday 4 November that Pope Francis and Palestinian President Mahoud Abbas met in a private audience in the Vatican on the same day.

According to a press release, their discussions were “cordial” and emphasized the good relations between the State of Palestine and the Holy See.

The Pope and the President spoke about the need to promote human fraternity and peaceful coexistence among various faiths, as well as the goal of a two-state solution in the Holy Land.

“With regard to the peace process between Israelis and Palestinians, it was stressed that it is absolutely necessary to reactivate direct dialogue in order to achieve a two-state solution, also with the help of more vigorous effort on the part of the international community,” the statement read.

Pope Francis and President Abbas also noted that “Jerusalem must be recognized by all as a place of encounter and not of conflict, and that its status must preserve its identity and universal value as a Holy City for all three Abrahamic religions, also through a special internationally guaranteed status.”

The two leaders then spoke about the “urgency of working for peace, avoiding the use of weapons, and combating all forms of extremism and fundamentalism.”

Read the article by Vatican News in Catholic Outlook.