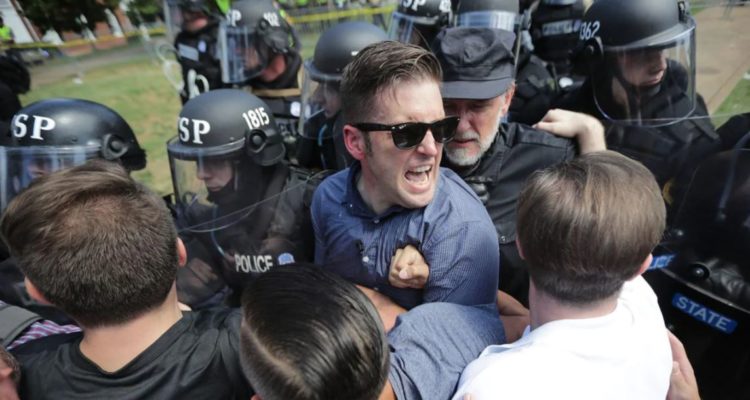 Richard Spencer, centre, and his supporters clash with Virginia State Police in Charlottesville in 2017. (AFP)

Neo-Nazis liable for $35m in damages

A federal jury in Virginia has awarded victims of violence stemming from a 2017 rally in Charlottesville, Virginia, more than $US25m ($34.5m), after finding white supremacist leaders and groups liable under state law for injuries suffered during a torchlight march and Unite the Right event.

The events on August 11 and 12, 2017, were attended by hundreds of members of white-­nationalist, neo-Nazi and militia groups from across the US Throughout the weekend, violent clashes with counter-protesters left dozens injured and one woman dead, after a white nationalist demonstrator drove his car into a crowd.

The lawsuit, filed in October 2017 by several people who were injured that weekend, used a post Civil War Reconstruction-Era law to attempt to hold liable the leaders and organisers who planned the violence and others who carried it out.

Among the defendants found liable were Jason Kessler, the primary organiser of the Unite the Right rally; Richard Spencer, considered a founder of the ­insurgent white supremacist movement known as the alt-right; and James Fields Jr, who was sentenced to life in prison for killing 32-year-old Heather Heyer when he drove into a crowd of counter-protesters.

The jury also held responsible several other white supremacist groups whose members promoted and participated in the rallies, including the National Socialist Movement, Vanguard America and League of the South.

The jury found the defendants liable under state law for injuries suffered.

Read the article by Deanna Paul in The Australian.