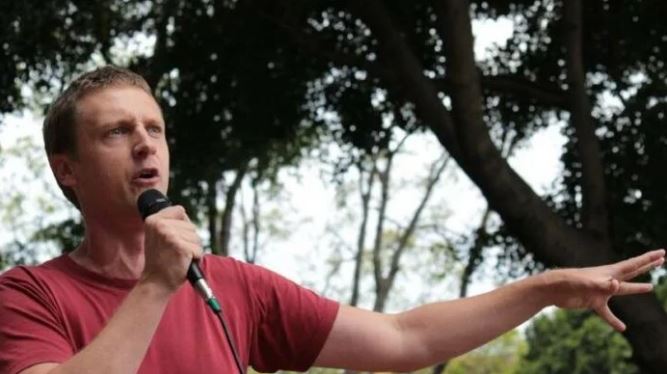 Well respected anti-racism activist, supporter of First Nations rights and prominent trade unionist, Padraic (Paddy) Gibson, had three neo-Nazi types, with shaven heads and shirts emblazoned with the Eureka flag, turn up on his front doorstep on the night of Saturday December 4.

The unexpected and uninvited visitors banged on his front door, calling out that they wanted to speak to him.

The three men soon commenced bashing on the door of his Sydney home, ripping at security screens and even broke a window.

Gibson explained that he has been the subject of death threats in the past, and welcomed the support that his multicultural neighbourhood has shown since the incident.

As a member of socialist group Solidarity, Padraic is a key figure on the local social justice movement.

He’s also a researcher at the UTS Jumbunna Institute, where he works under esteemed Professor Larissa Behrendt. And his work at the uni directly deals with Aboriginal deaths in custody.

It’s been lost on no one that this incident has occurred at a time when far-right groups have been emboldened, owing to their prominent mobilising as part of the ‘Freedom’ movement.

Of course, not all participants in the recent anti-lockdown and vaccine mandate rallies have been people who align themselves with right wing politics.

Read the article by Paul Gregoire in The Echo.