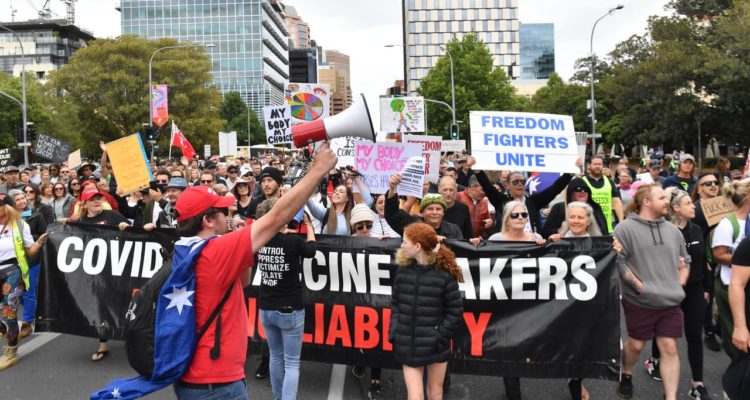 People at the ‘Freedom Rally’ march in Adelaide on Saturday. (Keryn Stevens)

Police have been alerted to racist neo-Nazi posters plastered across Adelaide, which some believe to be linked to the anti-vax movement.

Far-right neo-Nazi propaganda has been discovered strewn across the city, which some believed to be linked to Sunday’s Adelaide Freedom Rally.

Student and member of the Adelaide Campaign against Racism and Fascism Nicola Badran said she found almost 100 stickers in one area of the CBD on Monday, but believed there to be more.

“I was repulsed to see white supremacist messages broadcast so openly, it tells me the Nazi movement is growing, and has found a home and unopposed membership in the anti-vax movement,” Ms Badran said.

South Australian Police has confirmed it was aware of the stickers sprouting racist slogans such as ‘Australia for the white man’ and ‘ANZAC’s fought for White Australia’.

A spokesperson said it was “monitoring the situation”.

Protesters at “freedom” rallies oppose vaccine mandates and mask wearing but there are concerns they harbour and attract more extreme viewpoints.

Organiser at the Adelaide Campaign against Racism and Fascism, Tom Gilchrist said such white supremacist stickers are telling of a growing far-right.

“It’s a concerning fact that there are far-right groups and individuals which are organising at the ‘freedom’ rallies, a lot of the speakers at the rallies some of them have had involvement with far-right politics,” Mr Gilchrist said.

Read the article by Jason Katsaras in The Advertiser.