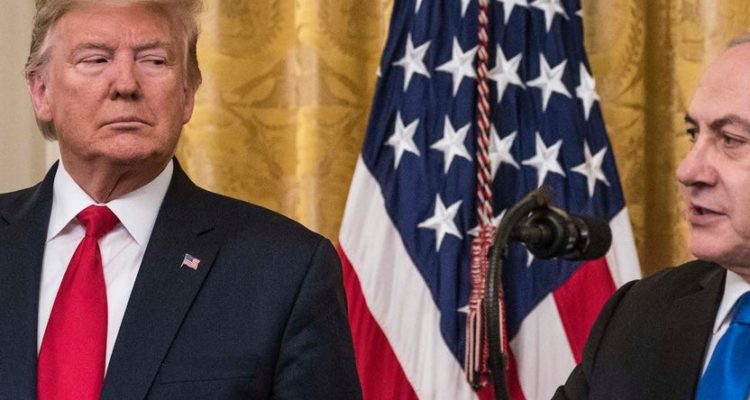 President Donald Trump and Israeli Prime Minister Benjamin Netanyahu participate in a joint statement in the East Room of the White House on January 28, 2020 in Washington, DC. (Sarah Silbiger/Getty)

Trump yelled ‘what the hell was that?’ after the White House’s Middle East plan went off the rails: book

Former President Donald Trump yelled, “what the hell was that?” at his aides after the White House’s January 2020 unveiling of the White House’s Middle East peace plan went off the rails, the author of a forthcoming book on US-Israel relations told the Forward.

Axios journalist Barak Ravid’s book “Trump’s Peace: The Abraham Accords and the Reshaping of the Middle East,” which goes inside the US-Israel relationship during the Trump years. Trump heavily emphasized cultivating a close relationship with Israel and then-Prime Minister Benjamin Netanyahu, and put his son-in-law Jared Kushner, who already had a previous relationship with Netanyahu, in charge of the White House’s Middle East relations.

Trump’s relationship with Netanyahu had already soured leading up to the rollout, Ravid told the Forward, with Trump feeling like some of his pro-Israel moves, including recognizing Israel’s annexation of the Golan Heights from Syria and moving the US Embassy to Jerusalem, hadn’t been sufficiently appreciated and reciprocated by Netanyahu.

In early 2020, the Trump administration unveiled a “peace plan” for the Middle East. The so-called “Deal of the Century” involved no discussions with Palestinian leaders, and they promptly rejected it.

Read the article by Grace Panetta and John Haltiwanger in Business Insider Australia.