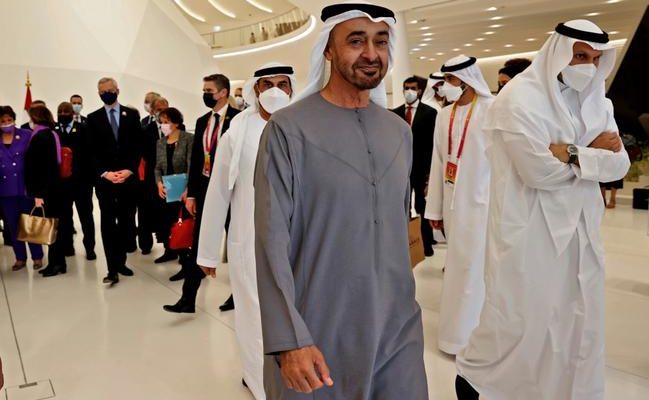 Bennett is to meet Abu Dhabi's Crown Prince Sheikh Mohammed bin Zayed Al-Nahyan, who is pictured at the Dubai Expo on December 3, 2021

Israel’s Naftali Bennett arrived in the United Arab Emirates Sunday for the first official visit by a prime minister of the Jewish state, after the countries established diplomatic ties last year.

The trip announced by Bennett’s office comes with Israel making a renewed diplomatic push against international talks which global powers resumed with its arch foe Iran over the Islamic republic’s nuclear programme.

There was no immediate comment from the UAE on the visit which Bennett called “historic”.

The prime minister said he appreciated the “very warm hospitality”.

In a video issued earlier, Bennett said relations between the two states were “excellent and extensive, and we must continue to nurture and strengthen them, and build the warm peace between the people”.

The UAE last year became the third Arab nation to establish full diplomatic relations with Israel after Egypt and Jordan.

The agreements were negotiated by Bennett’s predecessor, Benjamin Netanyahu, who said they would offer Israel new regional allies against Iran and bolster its diplomatic efforts to stop Tehran from acquiring nuclear weapons.

Trump unilaterally withdrew the United States from the nuclear deal in 2018 and stepped up sanctions against Iran.

Bennett has called for the Vienna talks to be halted, accusing Tehran of “nuclear blackmail” and charging that it will use any revenue from sanctions relief to bolster a military arsenal that can harm Israel.

Read the article in The Mercury (AFP).