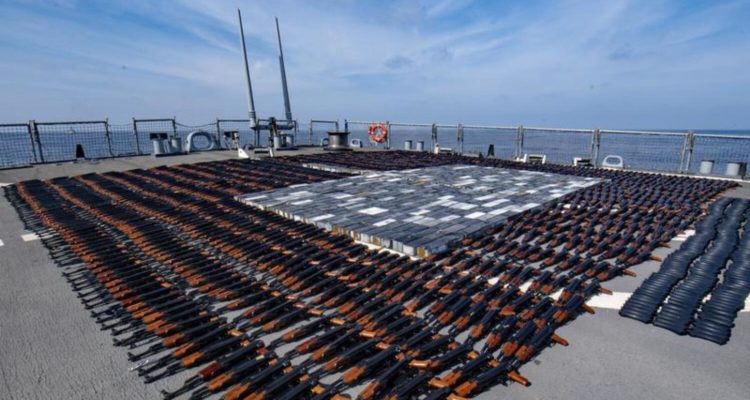 The US Navy has seized a large cache of assault rifles from a boat from Iran likely bound for Yemen. (AP)

The US Navy says it has seized a large cache of assault rifles and ammunition being smuggled by a fishing boat from Iran likely bound for war-ravaged Yemen.

US Navy patrol ships discovered the weapons aboard what the Navy described as a stateless fishing vessel in an operation that began on Monday in the northern reaches of the Arabian Sea off Oman and Pakistan.

It’s just the latest interdiction amid the grinding war in Yemen that pits Iran-backed Houthi rebels against a Saudi-led military coalition.

Western nations and UN experts repeatedly have accused Iran of smuggling illicit weapons and technology into Yemen over the years, fuelling the civil war and enabling the Houthis to fire missiles and drones into neighbouring Saudi Arabia.

Iran denies arming the Houthis despite evidence to the contrary.

In an unusually pointed move, the statement late Wednesday from the Navy’s Bahrain-based 5th Fleet blamed Iran for sending the weapons, saying the boat was sailing along a route “historically used to traffic weapons unlawfully to the Houthis in Yemen.”

“The direct or indirect supply, sale or transfer of weapons to the Houthis violates UN Security Council Resolutions and US sanctions,” the statement added.

Iran’s mission to the United Nations did not immediately respond to a request for comment on the interception.

Read the article in the Riverine Herald (AAP Newswire).