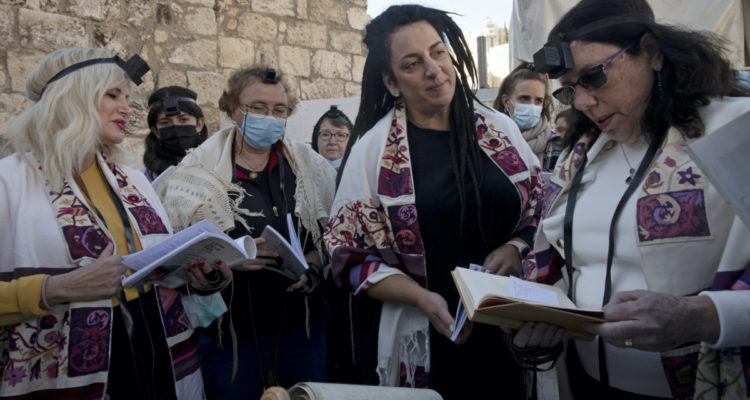 Members of Women of the Wall gather around a Torah scroll the group smuggled in for their Rosh Hodesh prayers at the Western Wall. (AP Photo/Maya Alleruzzo)

Future of prayer site in doubt under Israel’s fragile government

When Israel’s new government took office last June, it indicated it would press ahead on an egalitarian prayer site at Jerusalem’s Western Wall – a sensitive holy site that has emerged as a point of friction between Jews over how prayer is conducted there.

But the plan is coming up against the limits of Israel’s fragile government, which is struggling to move forward on the issue due to its own internal divisions. The inaction has disappointed both Israeli groups that promote religious pluralism and their American Jewish allies, who view the issue as an important test of recognition from the Israeli Government.

“Anyone can topple the government if they sneeze in the wrong direction,” said Anat Hoffman, chairwoman of Women of the Wall, a group that advocates for pluralistic prayer at the holy site. “They are very cautious with the temperature of the hot potatoes that come their way and the Western Wall is a special hot potato.”

The Western Wall is considered the holiest site where Jews can pray. Under ultra-Orthodox management, the wall is currently separated between men’s and women’s prayer sections.

Under the more liberal Reform and Conservative streams of Judaism, women and men pray together and women are allowed to read from the Torah, which Orthodox Judaism prohibits. Those streams are a minority in Israel but make up the majority of American Jews. Israel’s refusal to recognise these liberal streams has long been a point of tension with American Jews.

Read the article by Tia Goldenberg in Sight Magazine.