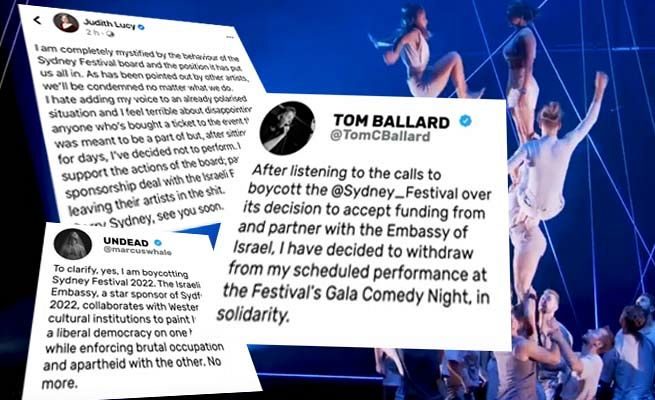 THE CULTURE WARS in Australia have always focused on ostracising the colonised people throughout the world, whether it be at home with Indigenous Australians or First Nations people overseas.

So, when it comes to issues around the policies of the Israeli Government towards Palestinian people, it should come as no surprise that more often than not, Australia chooses the side of the aggressor.

Criticism of Israel’s policies often results in people being denounced as anti-Semitic — though this criticism of the Israeli Government may not have a correlation with the insidious attacks on the Jewish faith.

This is illustrated by the recent mass artist boycott – orchestrated by the Boycott, Divestment, Sanctions movement (BDS) – of the Sydney Festival and the response towards the artists from many in the corporate media.

The Sydney Festival is an arts event that should be the resurrection of an industry that has been appallingly treated by the Morrison Government during the recent pandemic. The decisions by the board have sadly rendered this impossible.

In May, the festival agreed to accept $20,000 from the Israeli Government, platforming them as a star sponsor in the process. The Middle-Eastern nation has attempted in recent times to whitewash its settler-colonial image through a raft of art sponsorships, trying to obfuscate from Human Rights Watch noting that Israel operates a regime of persecution.

Read the article by Dechlan Brennan  in Independent Australia.