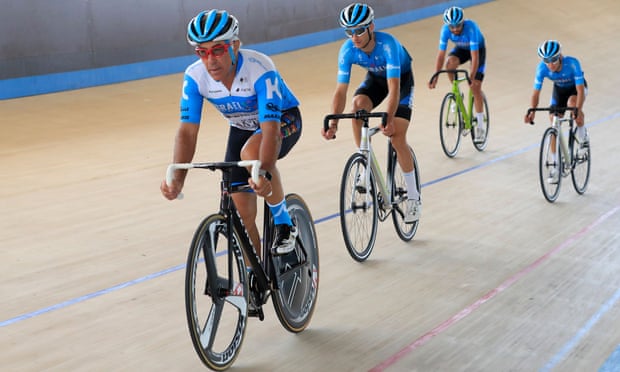 Sylvan Adams with members of his team Start-Up Nation at his velodrome in Tel Aviv in June 2020. (Emmanuel Dunand/AFP/Getty)

Sportswashing is associated with certain countries – why not Israel?

In the summer of 2020 a group of five cyclists from Ramallah were out on a ride when they were stopped by a group of Israeli settlers. According to Reuters, on discovering the cyclists were Palestinian, the settlers began hurling stones at them. Four escaped into a nearby field. One, Samer Kurdi, lost his footing and was repeatedly beaten with a metal rod, suffering serious injuries. It is not known if any arrests were made.

For Chris Froome and his colleagues on the Israel Start-Up Nation pro cycling team, the roads of the occupied West Bank were a far safer place last November, as they rolled through the Judaean Hills on an open training ride. English-language media were flown out to Israel and given full access to the team during their first camp in Israel since 2019. The team and their followers were treated to luxury hospitality, taken on beach visits and kayaking excursions. But then Israel Start-Up Nation – the fledgling team relaunched last week as Israel-Premier Tech – has always known the value of good PR.

Peter Sagan was one of its early ambassadors, and the recruitment of other top riders like Froome, Sep Vanmarcke and Dan Martin have helped to grow its sporting reputation. But the team’s most enthusiastic publicist is billionaire co-owner Sylvan Adams, a self-styled “ambassador-at-large for the State of Israel” who sees in sport a means of enhancing the country’s standing amid widespread criticism over its human rights record, treatment of Palestinians and continued defiance of international law.

It was Adams who drove Israel’s audacious £9m bid to host the start of the Giro d’Italia in 2018, the first part of an unprecedented investment in international sport. The same year he built the region’s first Olympic-standard velodrome, which will host the junior track worlds in August. Argentina and Uruguay visited Tel Aviv for an international friendly in 2019, as did Paris Saint-Germain and Lille last August for France’s equivalent of the Community Shield. There is even some serious talk within Fifa of a joint 2030 World Cup bid with the United Arab Emirates and Bahrain.

Read the article by Jonathan Liew in The Guardian.