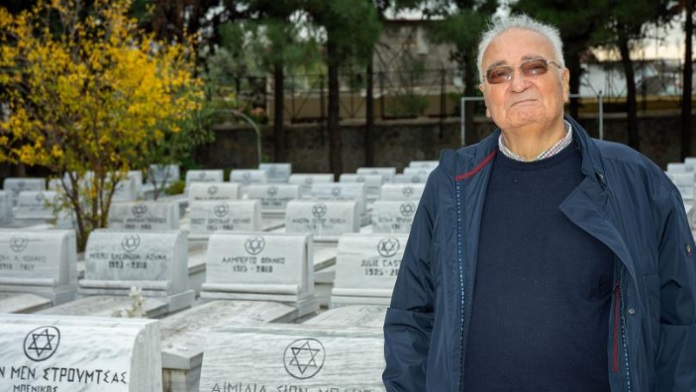 Jacky Benmayor in the New Jewish Cemetery of Thessaloniki, where his father Leon is buried. (Elena Kaniadakis/euronews)

Jacky Benmayor: The last speaker in Greece of a Jewish language close to extinction

There is currently a renewed interest in preserving the Jewish cultural heritage of Thessaloniki and Jacky Benmayor plays a key role in fulfilling this need.

Benmayor is the last speaker in Greece of Judeo-Spanish, or Ladino, a language derived from Old Spanish spoken by the Jews driven out of Catholic Spain in 1492.

Why? Because, as the curator of the Jewish Museum of Thessaloniki told Euronews, after the Holocaust and the annihilation of more than 90% of the total Jewish population, many Jewish people struggled to pass on Ladino, even for political reasons.

“Many survivors didn’t want to speak the language that had made them targeted. They believed that if extermination had happened once, it could happen again. As a matter of consequences, Jewish families claimed that they were first and foremost Greeks,” Evangelos Hekimoglu told the website.

Circumstances for Benmayor, however, were different. He was able to learn the language from his father, Leon, who was deported to Auschwitz at the age of 27.

“My father was the only member of his family to survive: he was not inclined to speak about his experience in the concentration camp, but he taught me Ladino, which was the first language spoken in my family,” Benmayor said.

Read the article in The Greek Herald (euronews).