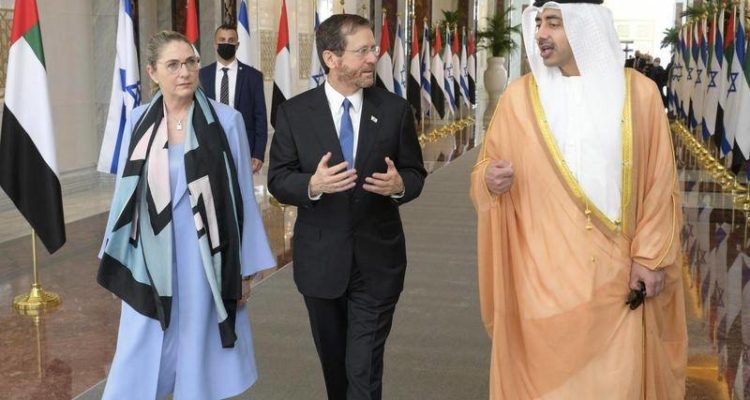 Israeli President Isaac Herzog's (centre) visit to the UAE comes amid rising tension in the region.

The United Arab Emirates says it intercepted a ballistic missile fired by Yemen’s Iran-aligned Houthi movement as the UAE hosted Israeli President Isaac Herzog on his first official visit to the Gulf business and tourism hub.

In the third such attack on the US-allied Gulf state in the past two weeks, the Houthis’ military spokesman said they fired Zulfiqar missiles at Abu Dhabi and drones at Dubai.

He reiterated a warning to residents and firms to “stay away from vital headquarters and facilities” in the UAE, which prides itself as a safe business haven and global tourism destination.

The United States condemned the assault, which followed a deadly hit on Abu Dhabi on January 17 in an escalation of the Yemen war between the Houthis and a Saudi-led coalition, which includes the UAE.

A senior Emirati official described the attacks as “useless” provocations that would be dealt with to safeguard national security and sovereignty. “Those who test the UAE are mistaken,” the official, Anwar Gargash, said in a Twitter post.

The UAE defence ministry said the missile was intercepted 20 minutes past midnight on Monday and its debris fell on an uninhabited area. It did not say whether it was aimed at Abu Dhabi or Dubai.