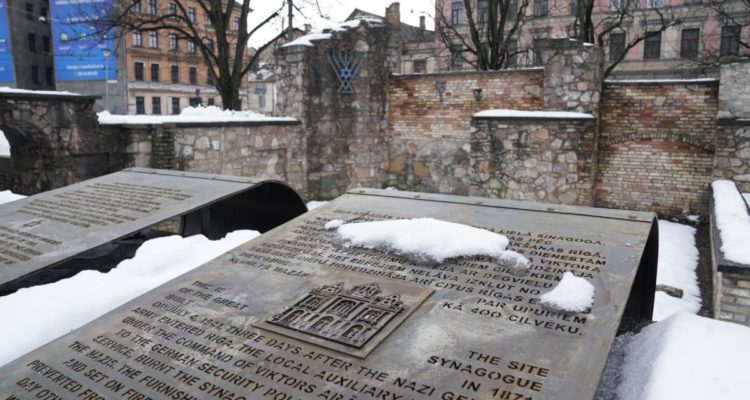 The memorial on the ruins of the Riga Choral Synagogue burned to the ground by Nazis in 1941, in memory of those who perished in the blaze, in Riga. (AP/Roman Koksarov)

Latvia’s parliament passed a Holocaust restitution bill this week that includes compensation for lost Jewish property and funding to revitalize the Baltic nation’s Jewish community, which was almost completely wiped out during World War II.

Following years of wrangling over the issue, the 100-seat Saeima voted 64 to 21 to approve the Law on the Compensation of Goodwill to the Latvian Jewish Community on the bill’s final reading.

“Finalising this process demonstrates that even 77 years after the end of the Holocaust, it is never too late for justice,” he said.

Lengthy negotiations involving the World Jewish Restitution Organization, or WJRO, Latvian Jewish representatives and government authorities started in 2005. The United States and Israel also were involved in the talks.

“For the [Jewish] community, we hope now to turn the page and close the book of World War II and its legacy,” Dmitry Krupnikov, head of the Latvian Jewish Community Restitution Fund, told The Associated Press. “It would be very good to put that behind us. We have a lot of things to address in the present conditions that we have here.”

US Secretary of State Antony Blinken tweeted praise for “Latvia’s ongoing work to preserve the memory of the Holocaust and promote education about this dark period in history.” Passing the bill “shows true commitment to addressing Holocaust-era property theft,” Blinken said.

Read the article by Jari Tanner in Sight Magazine.