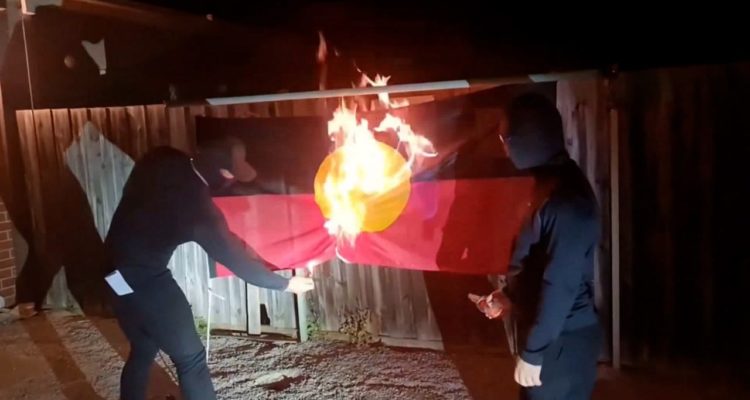 The group posted the video reading a statement before burning the flag. (The Age chose not to show the racist slur included in the original video).

On January 19, a propaganda video depicting three masked neo-Nazis burning an Aboriginal flag, performing Sieg Heil salutes and reciting a white supremacist manifesto began circulating on social media. The video was poorly filmed and produced, reeking of a desperate effort to gain publicity and followers for a new extremist group.

Yet it began to gain traction with mainstream news outlets, largely because it singled out Greens senator Lidia Thorpe, who is also Indigenous. The senator’s name, alongside a vicious racist slur, was written on a sign behind the men. Soon, terror experts were warning of the potential for the video to incite attacks or further harassment of Thorpe, a development the anonymous neo-Nazi propagandist who uploaded the video greeted with glee in subsequent online postings.

But this neo-Nazi, who uses the online alias “John Dixon”, also made a mistake. Among hundreds of vicious and violent online posts – including those referencing the Christchurch terrorist – he left a breadcrumb trail of clues pointing to his true identity.

A deep dive into Eracleous’s online posts, court cases and interactions with other neo-Nazis provides a case study of what ASIO’s director-general, Mike Burgess, warned this week is an expanding and deeply disturbing trend: the descent of young Australians – some as young as 13 – into extremism.

Read the article by Nick McKenzie in The Age.