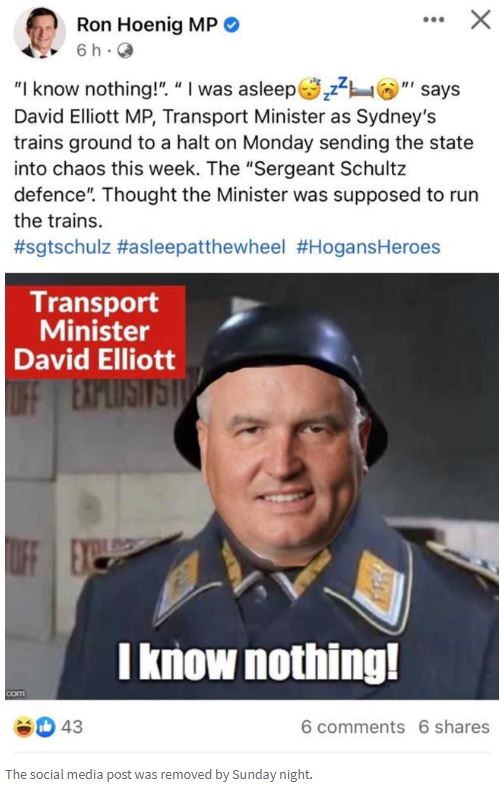 A Labor frontbencher has been directed to remove a social media image depicting the transport minister in a Nazi uniform as Sergeant Schulz from sitcom Hogan’s Heroes.

A senior Labor frontbencher has been forced to take down an image depicting Transport Minister David Elliott in a Nazi uniform as the fictional Sergeant Schultz from 1970s US sitcom Hogan’s Heroes.

The meme, which accused Mr Elliott of deploying the “Sergeant Schulz” defence in relation to Monday’s train debacle, drew criticism from Mr Hoenig’s own side.

A Labor source last night said the post was in bad taste, and said Mr Hoenig had been directed to take the post down.

The image, posted on Sunday morning, had disappeared by Sunday night.

Mr Elliott – who is also Veterans Minister – is a former soldier.

“No one appreciates the brutality of state politics more than me and I’m more than happy to have people take the mickey if it makes them feel better but there are plenty of other ways to do it than depict me in a Nazi uniform,” Mr Elliott said.

Mr Elliott was asleep when bureaucrats decided to shut down the train network last Monday amid an ongoing industrial dispute.

Read the article by James O’Doherty in The Daily Telegraph.