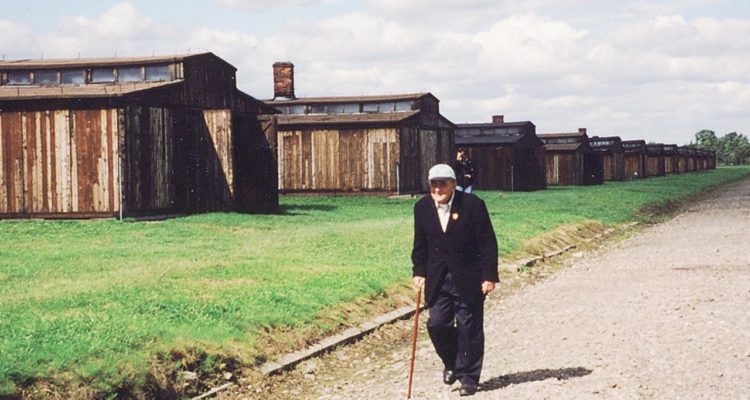 Dr Bernard walking in Field A at Auschwitz.

There were few clues about Henry Bernard’s dark past in Nazi death camps but his son would unlock the truth of seven decades of torment.

From the rifle displayed in the living room to the distinctive striped “pyjamas” in a drawer, there were clues that Sydney GP Henry Bernard was not your typical dad.

But it took 40 years for his son, Tony, to unlock his father’s dark Holocaust secrets that tormented him for seven decades after the war.

Henry Bernard is the subject of a two-part series of the free In Black and White podcast on Australia’s forgotten characters.

Tony tells the story in new book The Ghost Tattoo, which begins with his idyllic Sydney childhood growing up sailing, surfing and swimming at the beach.

Henry, a Polish Jew who anglicised his surname from Bierzynski, survived several brushes with death during the Holocaust.

But he was so scarred by anti-Semitism in Poland, his homeland, before, during and after the war that his three children grew up not even knowing they were Jewish.

Henry’s children were familiar with his Auschwitz tattoo, B1224, in blue ink on his forearm.

And a drawer in his bedroom was a personal shrine, containing a photo of his mother and his faded Auschwitz uniform in blue and cream stripes.

Henry kept a rifle on a rack on full display in the living room, and took it with them on family driving holidays.

Read the article by Jen Kelly in the Herald Sun.