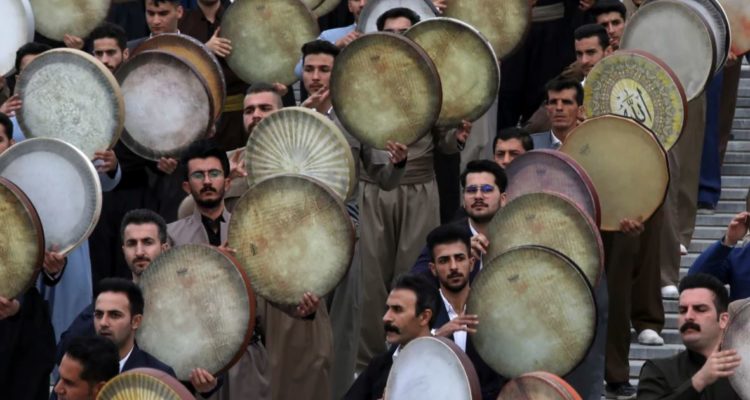 Musicians from the Kurdish western region of Iran play Daf, a hand-held Persian drum, in a ceremony ahead of the Iranian New Year, or Nowruz, at a park in Tehran, Iran, on Monday. (AP)

The plot, which the corps described as a “major” sabotage attempt against an Iranian nuclear facility, was intended to be carried out before March 21, the Persian New Year or Nowruz. The operation involved an employee at Fordow cooperating with Israeli intelligence officers in exchange for cash and digital currency, according to IRNA.

Iran’s nuclear program has weathered a number of attacks over the years, including the assassination of one of its top nuclear scientists and an explosion near the Natanz enrichment facility. More recently, Iran claimed that international surveillance cameras in its Karaj nuclear facility had been hacked. Iranian officials have blamed Israel for these incidents.

Iranian state television earlier reported the “Zionist regime” — a Tehran reference meaning Israel — has for years been trying to hit Fordow unsuccessfully. The report on Monday (Tuesday AED) did not say how many suspects were arrested, what their nationalities were or when and where the arrests supposedly took place.

Read the article by Amir Vahdat in The Sydney Morning Herald.