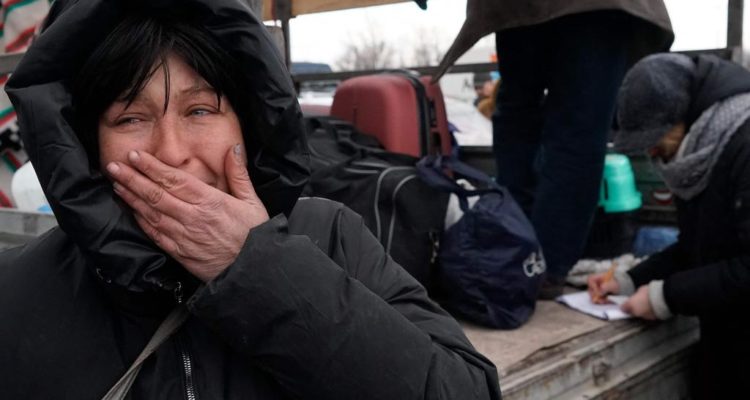 Evacuees from Mariupol are seen upon arrival at the car park of a shopping centre on the outskirts of the city of Zaporizhzhia, which is now a registration centre for displaced people. (AFP)

Ukrainians are allegedly being “deported violently” into Russia and taken to “filtration camps” in scenes compared to WWII.

A 96-year-old who survived four concentration camps during the Holocaust was killed in a Russian air strike in Ukraine.

Boris Romantschenko was living in a Kharkiv apartment hit during a Russian attack on Friday, his son and granddaughter told the Buchenwald Memorial Institute.

News of his death came as Ukraine’s Jewish president, Volodymyr Zelensky, compared Russia’s invasion to the Holocaust to pressure Israel to “make its choice” in the conflict.

Heavy Russian shelling in the eastern city lead to the death of the World War II survivor who lived through the notorious Buchenwald concentration camp, as well as those at Peenemünde, Dora and Bergen Belsen.

“It is with dismay that we have to report the violent death of Boris Romantschenko in the war in Ukraine,” Buchenwald Memorial said in a statement.

The Buchenwald Memorial described Mr Romantschenko as “a close friend” who, as the vice president of the Buchenwald-Dora International Committee, was committed to educating others about the horrors of the Nazi era.

Romantschenko was born into a family of farmers in Bondari, near the Ukrainian city of Sumy, on January 20, 1926.

Although he was not Jewish, he was taken by German soldiers when he was 16 years old and deported to the German city of Dortmund in 1942 to work as a forced labourer, as part of Nazi intimidation tactics against the Ukrainian population at the time.

A failed escape attempt landed him in the notorious Buchenwald concentration camp in 1943. He also spent time in the camps of Peenemuende, where he was forced to help build V2 rockets, and in Mittelbau-Dora and Bergen-Belsen.

Read the article by Justin Vallejo, Maria Bervanakis and AFP in the Townsville Bulletin.