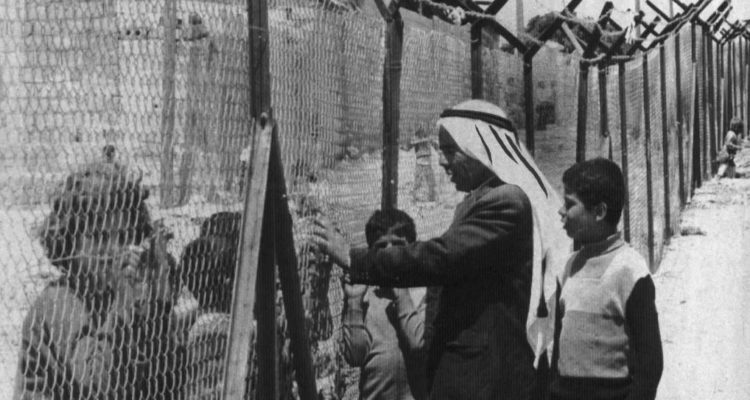 The town of Rafah on the border of Israel and Egypt, has a history stretching back thousands of years to the time of the pharaohs. It began as settlement around an oasis at the point where the Sinai meets the Gaza Strip. In 1906, under British pressure, a border line was drawn between Egypt and the Ottoman-ruled Palestine and Rafah became a divided city. When Israel was created in 1948, Gaza was under Egyptian control but Rafah was kept divided. After the 1967 Six Day War, when Israel captured the Sinai and Gaza, Rafah was united and the old border taken down. Then in 1982 Rafah was again divided, this time by a barbed-wire fence, with half the town in Israel and the other half in Egypt.

RAFAH, 25 March. For the sixth time today, Fatchi Hamban Shair climbed to the top of his house in Israel, pointed to the red marker flag on his roof, and waved past it to his mother-in-law who after 25 April will live in Egypt.

Next door, two Arab cousins sat in wicker chairs under palm trees in their yard drinking Turkish coffee. After 25 April the yard will be split by a barbed-wire fence. One cousin will live in Israel, the other in Egypt.

This is Rafah, a noisy, crowded Arab town of 100,000 people, on the northern Sinai border. After the Israeli withdrawal on 25 April, it will be handed one of the bitter fruits of peace — municipal schizophrenia.

Television crews have been pouring into Rafah and reporters have stood on Fachi’s rooftop talking to their cameras in a variety of languages. A divided city, it seems, is a place of human drama, smuggling, mystery and romance.

The people of Rafah take a healthily sceptical attitude towards the curious. They joke about some of the divided city’s problems. One Moslem town councillor, with two wives and families in different houses, will now have one wife in Israel and one in Egypt.

Read the archive by Janet Hawley in The Age.