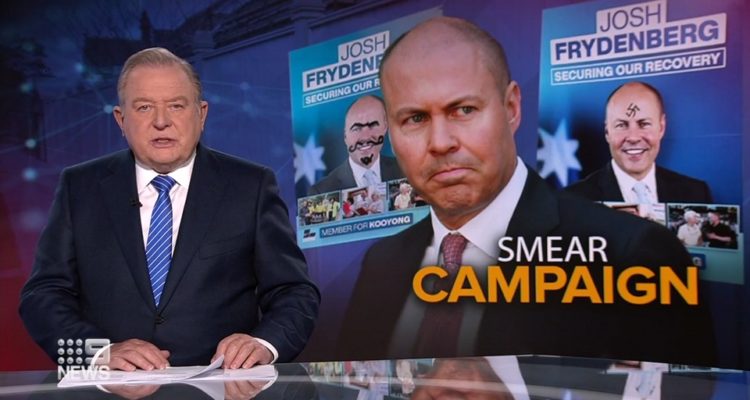 Federal Treasurer Josh Frydenberg has warned of the threat of radicalism in Australia after electoral signs bearing his image were defaced with anti-Semitic imagery.

Mr Frydenberg, who was born in Australia to Jewish parents, took to social media on Monday afternoon to share an image of a campaign sign where a swastika had been drawn on his forehead.

“Vandalism is a crime. This kind of vandalism is obscene,” the caption read.

“It doesn’t matter which political group is on the receiving end, it’s just not on. Our community deserves better. Swastikas are a reminder of a dark past and it’s our collective duty to say ‘never again’.”

A source within Mr Frydenberg’s office who was not authorised to speak publicly told The Age that volunteers had cleaned hundreds of vandalised signs since February.

Some had been vandalised with markers, smeared with dog faeces, ripped off and discarded. One had the line “My mum’s a refugee, she’s ashamed of me” scribbled on it, while another had a Hitler moustache painted on Mr Frydenberg’s face.

A handful had been defaced with anti-Semitic symbols. The swastika on the image shared by Mr Frydenberg was painted on signage in Mont Albert in the past two weeks.

A supporter of Mr Frydenberg’s, Cameron Clark, said his sign had been targeted four times.

Read the article by Marta Pascual Juanola in The Sydney Morning Herald.