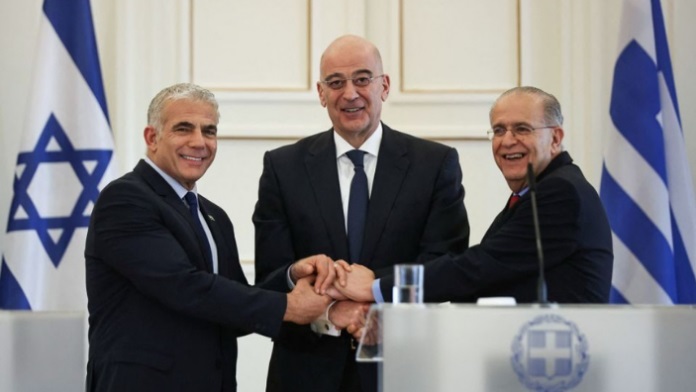 The foreign ministers of Cyprus, Greece and Israel reiterated on Tuesday their commitment to a ‘strategic alliance’ of the three nations, pledging to expand energy cooperation in an otherwise turbulent region.

The trilateral summit in Athens was hosted by Greece’s FM, Nikos Dendias, and was attended by his Cypriot and Israeli counterparts, Ioannis Kasoulides and Yair Lapid.

Dendias held separate talks with Kasoulides and Lapid, after which the three had a joint meeting.

At a joint news conference following the talks, Dendias spoke of the “unbreakable nature” of the trilateral cooperation, and stressed the three nation’s desire to enhance energy cooperation amid the current Ukraine crisis.

“Our three countries can and should be part of the solution of Europe’s quest for diversified, secure and cleaner energy supply from the Levantine corridor,” the Cypriot Foreign Minister added.

Cyprus, Greece and Israel have agreed to build the world’s longest and deepest underwater power cable that will traverse the Mediterranean seabed and link their electricity grids. The project, called the Euro-Asia interconnector, is expected to be completed by 2024.

Kasoulides said Cyprus, Greece and Israel are “proceeding” with this project, as well as the EastMed Pipeline, after receiving “significant support from the EU and the US.”

Read the article in The Greek Herald (from Cyprus Mail).