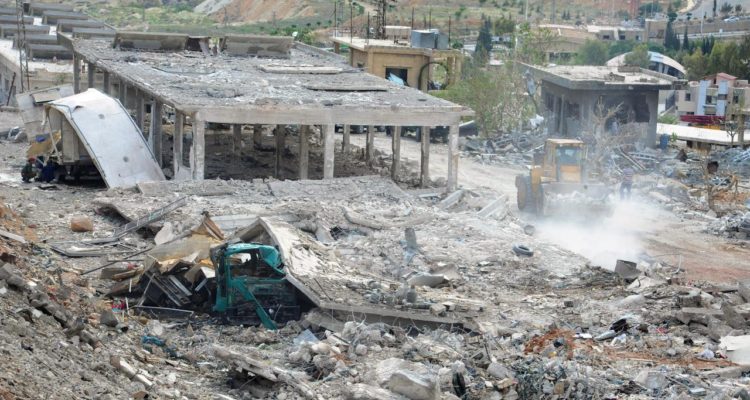 Buildings wrecked by a 2013 Israeli airstrike near Damascus.

The Israeli military says it has carried out more than 400 airstrikes in Syria and other parts of the Middle East since 2017 as part of a wide-ranging campaign targeting Iran and its allies, offering the fullest picture yet of its undeclared war with Tehran.

Israeli leaders refer to the campaign as the “war between the wars”, which is aimed at deterring Iran and weakening Tehran’s ability to hit Israel in the event of an open war between the two regional adversaries.

Israel’s airstrike campaign in Syria has hampered Iran’s military ambitions, military analysts say, but it has also pushed the conflict into other arenas, with both countries battling at sea, in Iran, and above Israel’s skies.

“It’s not 100 per cent success,” said Major General Amikam Norkin, who retired last week as head of Israel’s air force, where he served as architect of the campaign. “But without our activity, the situation here might be much more negative.”

Among the targets hit by Israel are Russian-supplied air-­defence systems, drone bases operated by Iranian military advisers, and precision-guided missile systems bound for Hezbollah fighters in Lebanon. The strikes have also killed more than 300 people, including Iranian military commanders, Syrian soldiers, militants backed by Iran and at least three civilians.

The Israel campaign started with a narrow focus in Syria on Iranian arms shipments bound for Hezbollah fighters in Lebanon. Over time, it expanded to target Iran-backed fighters in Syria and then began directly striking Iranian military positions in Syria.

Read the article by Dion Nissenbaum in The Australian (from The Wall Street Journal).