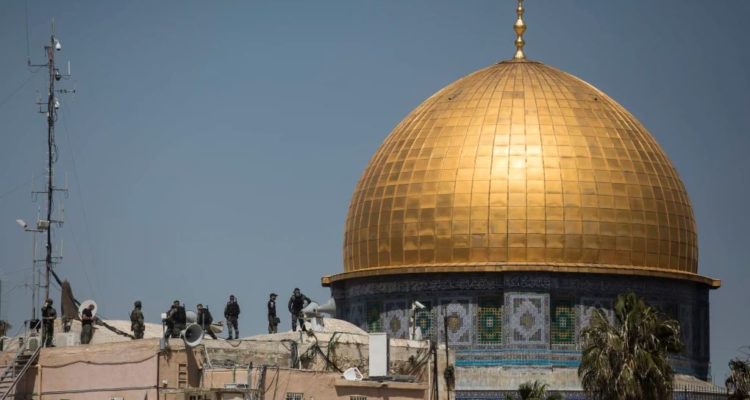 Israeli police stand on a rooftop near Al-Aqsa mosque. (Getty)

The police cleared Palestinians out of the sprawling esplanade outside the mosque itself early on Sunday, Jerusalem time, while dozens of Palestinians remained inside the building chanting “God is Greatest”.

The site is the third holiest in Islam and the holiest for Jews, who refer to it as the Temple Mount. It has long been a flashpoint for Israeli-Palestinian violence.

Clashes erupted at the site before dawn on Friday after police said Palestinians had hurled stones toward the Western Wall, an adjacent Jewish holy site. Police entered in force and clashed with dozens of Palestinians shortly after dawn prayers.

The hilltop compound is in Jerusalem’s Old City, home to major sites sacred to Jews, Christians and Muslims. This year, the Muslim holy month of Ramadan, Christian holy week culminating in Easter Sunday and the weeklong Jewish Passover are all celebrated at the same time, with tens of thousands of visitors flocking to the city after coronavirus restrictions have been mostly lifted.