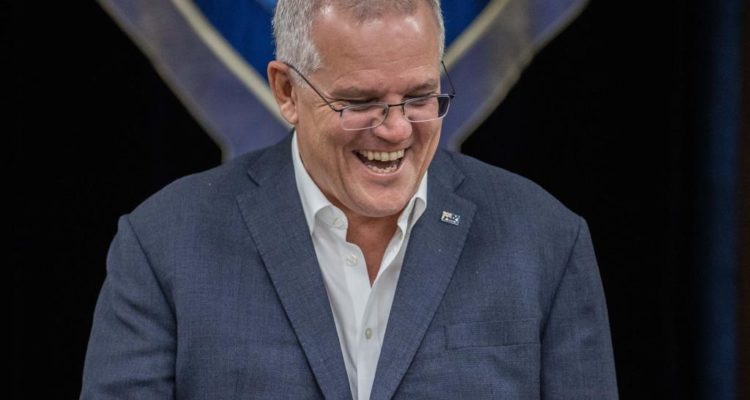 The prime minister shares a light moment with the gathered at the Hawthorne synagogue. (Jason Edward)

Scott Morrison has ended the day by attending a Passover service at a Melbourne synagogue – and he even wore a traditional cap for the occasion.

The prime minister joined the Treasurer for a Passover service at a synagogue in Hawthorn East on Friday afternoon.

Mr Frydenberg addressed the congregation, joking: “Prime Minister, you are the only thing standing between a room full of Jews and a very big meal, so I will be brief”.

The Treasurer went on to praise Mr Morrison for his understanding “the importance of religion and faith in our community”.

“Whether it is your steadfast support for Israel … or whether it is standing firm in the face of rising anti-Semitism here and abroad, you have been a genuine friend of Israel and the Jewish people,” Mr Frydenberg said.

Mr Morrison also addressed his “Jewish friends” at the service, saying he “loves the community of faith”.

“(In Judaism) there is a deeply held belief in the dignity of every single human being,” he said.

Earlier in the day the prime minister declared Easter was not about politics — but it became just that after his wife Jenny and Tony Abbott appeared at the same Good Friday church service as Anthony Albanese.