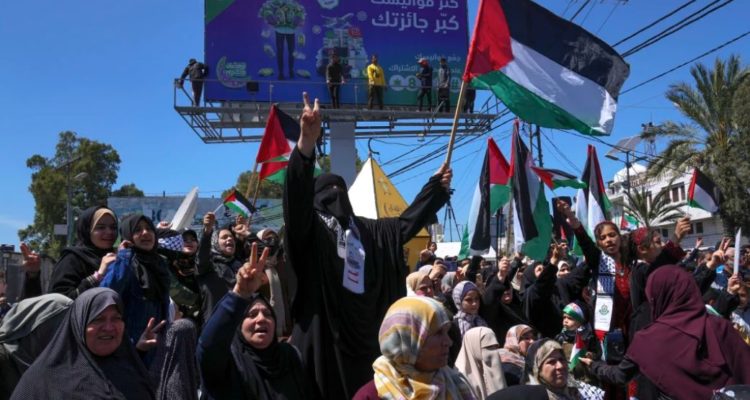 Women wave Palestinian flags and chant slogans during a rally in solidarity with Palestinian residents of the West Bank and Jerusalem, in Gaza City on Friday. (AP)

Hours earlier Palestinian militants fired a rocket into southern Israel for the first time in months, in another escalation after clashes at a sensitive holy site in Jerusalem, a series of deadly attacks inside Israel and military raids across the occupied West Bank.

Israel said it intercepted the rocket, and there were no immediate reports of casualties or damage in either strike.

Israel holds Gaza’s militant Hamas rulers responsible for all such projectiles and usually launches airstrikes in their wake. It was the first such rocket fire since New Year’s Eve.

The leader of the Islamic Jihad militant group, which boasts an arsenal of rockets, had issued a brief, cryptic warning, condemning Israeli “violations” in Jerusalem.

Ziad al-Nakhala, who is based outside the Palestinian territories, said threats to tighten an Israeli-Egyptian blockade on Gaza imposed after Hamas seized power 15 years ago “can’t silence us from what’s happening in Jerusalem and the occupied West Bank.”

However, no Palestinian group claimed responsibility for the rocket fire.

Palestinians and Israeli police clashed over the weekend in and around the Al-Aqsa Mosque compound in Jerusalem, which has long been an epicentre of Israeli-Palestinian violence. It is the third-holiest site in Islam and the holiest for Jews, who refer to it as the Temple Mount because the mosque stands on a hilltop where the Jewish temples were located in antiquity.

Read the article by Joseph Krauss in the Brisbane Times.