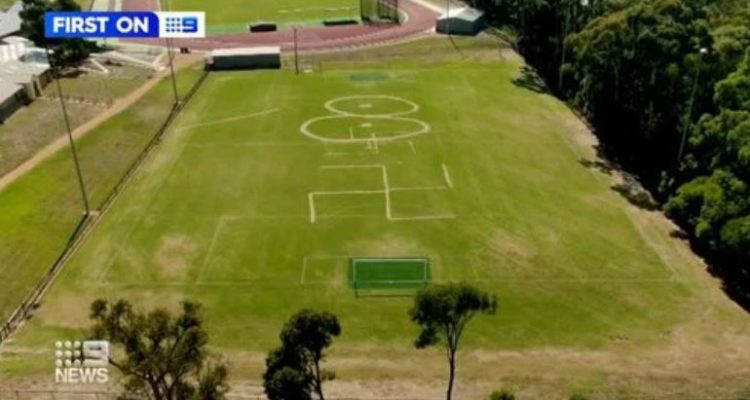 Melbourne north east has been shocked by a Nazi ‘Haken Kreuz’ (Hooked Cross) that has been drawn on a football field where junior soccer teams train and play.

This horrifying act of vandalism has drawn anger from descendants of Holocaust survivors.

Victoria has started the legal process to ban the public display of Nazi symbols.

While Hindu community members are in favour of banning the hateful Nazi symbol, they have also requested various state governments not to ban the deeply sacred and religious ‘swastika’. As such a ban will demonise hundreds of thousands of Hindus living peacefully all over Australia.

Nine News reports that chemicals were used to draw the giant Haken Kreuz into Morrison Reserve at Mt Evelyn.

This giant Nazi symbol was spotted by the grandson of a Holocaust survivor while taking a helicopter ride.

The man who noticed it told Nine News:

“My grandfather is the soul survivor of his family. To see it at that sort of scale is pretty horrifying. It’s concerning as how does something like that take place? How is there no action, how is there no immediate action? People should understand why something like this is so bad and how it does actually affect people.”

It is reported that local families who visit this field for a walk or exercise noticed the grass has been discoloured for more than month.

Read the article in The Australia Today (Bureau Report).