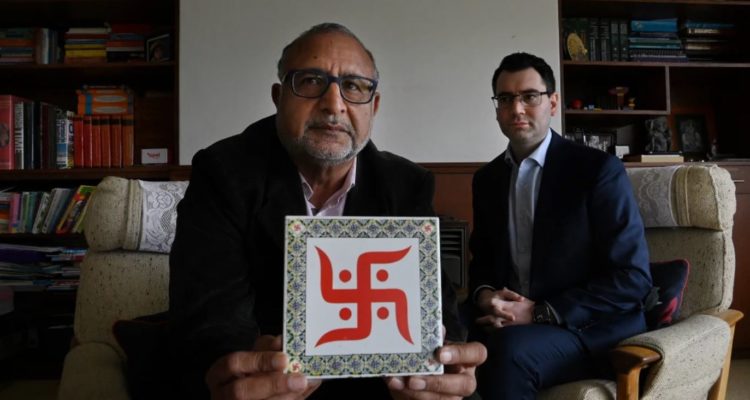 Surinder Jain, national vice president of the Hindu Council of Australia, has joined forces with NSW Jewish Board of Deputies chief executive Darren Bark to promote awareness of the sacred swastika. (Kate Geraghty)

Push to liberate religious swastika in NSW from its ‘indoor prison’

Surinder Jain has a dream: to normalise the swastika in Australia.

Not the hate symbol that featured on the Nazi flag and is still waved by far-right racists today. Jain is referring to the ancient icon that plays a central role in the religious practice of hundreds of millions of people around the world.

“For us, it is a symbol of peace and prosperity, not an evil symbol of destruction,” Jain, the vice president of the Hindu Council of Australia, said.

But he says many Australian Hindus, including himself, are afraid to display the icon in public because of its superficial similarity to the hakenkreuz – the Nazis’ “hooked cross”.

While it is common to see the ancient swastika prominently displayed on exterior walls and street chalk drawings in India, Jain says the symbol has largely been trapped in an “indoor prison” in Australia.

“Even in the house we try to make it not very visible,” he said. “We display it inside our temples, but we don’t take it outside because it would be misunderstood.

“I had a case where a Jewish friend came over to my house, saw the swastika and was terrified. I explained it was a sacred symbol for us and they were OK with that.”

In 2019, an Adelaide resident went public when a delivery man defaced an elaborate swastika artwork displayed on his doorstep, presumably under the misapprehension it was a hate symbol.

Read the article by Matthew Knott in the Brisbane Times.