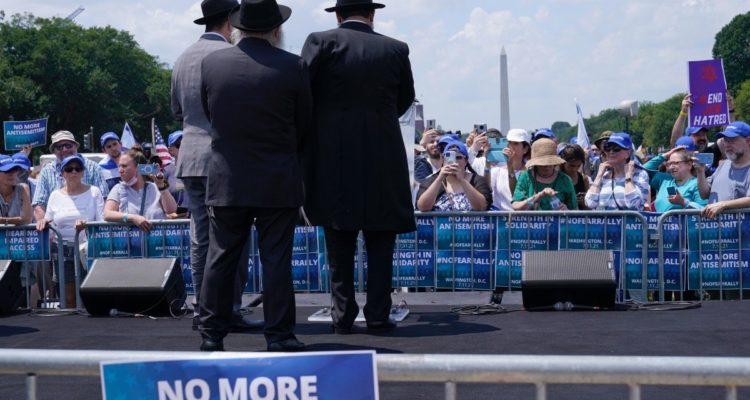 People attend the "NO FEAR: Rally in Solidarity with the Jewish People" event in Washington, on Sunday, 11th July, 2021, co-sponsored by the Alliance for Israel, Anti-Defamation League, American Jewish Committee, B'nai B'rith International and other organisations. (AP Photo/Susan Walsh)

A Jewish civil rights organisation’s annual tally of anti-Semitic incidents in the US reached a record high last year, with a surge that coincided with an 11-day war between Israel and the Hamas militant group, according to a report released Tuesday.

The Anti-Defamation League counted 2,717 anti-Semitic incidents of assault, harassment and vandalism in 2021, a 34 per cent increase over the previous year and the highest number since the New York City-based group began tracking such incidents in 1979.

Over 260 Palestinians and 13 Israelis were killed during the May 2021 war between Israel and Hamas. Israeli aircraft struck hundreds of targets in Gaza, while Hamas launched thousands of rockets at Israel. The Israeli air force bombed and destroyed a 12-story tower that housed dozens of families as well as offices belonging to The Associated Press and the Al-Jazeera satellite channel.

ADL counted 297 anti-Semitic incidents that occurred between the 10th May start of military action and the end of the month, a 141 per cent increase from the 123 incidents that it counted during the same period in 2020.

“The perpetrators of many of these incidents explicitly referred to the conflict between Israel and Hamas,” the report says.

ADL said its tally of anti-Semitic incidents still increased by 46 per cent during the last 20 days of May, 2021, compared to the same period in 2020, even when incidents with explicit references to Israel or Zionism are excluded.

“It’s alarming because the vitriol against the Jewish community is coming from all angles,” said Oren Segal, vice president of the ADL’s Center on Extremism.

Read the article by Michael Kunzelman in Sight Magazine.