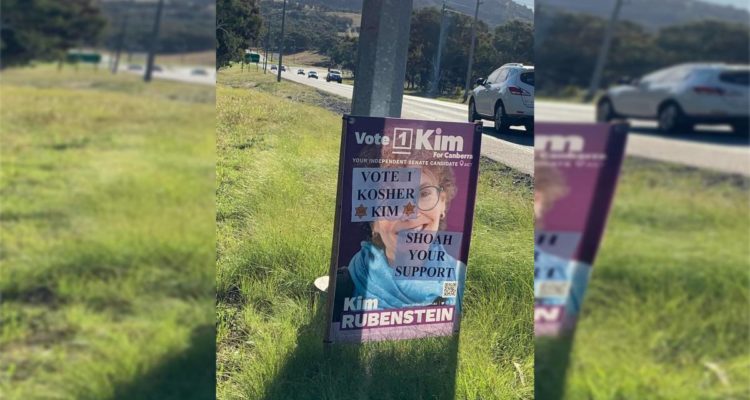 Her campaign said they had informed ACT Policing.

The police said: “Racial vilification is a crime and unacceptable in our community. The ACT’s laws send a very clear message that such behaviour is not tolerated.” Such a crime could incur a fine of up to $8000.

Other campaigns have also had placards defaced. The “black sun” symbol used by the Nazis and since the war by neo-Nazis has appeared on placards for several parties. It accompanies the anti-democratic slogan “voting will not remove them”.

The defacements on Kim Rubenstein’s election placards allude to her Jewishness, and use the yellow star symbol which was the badge the Nazis compelled Jews to wear in Germany before sending them to be murdered in their millions.

The slogans also use the word “Shoah” light-heartedly. “Shoah” is the Hebrew word for the Holocaust.

The candidate said she was hurt by the sight of the slogans. “I’ve got a pretty thick skin and was warned this could happen,” she said.

“But I’m writing this as a reminder that we must be vigilant against any behaviour that seeks to vilify people for their religion, race, ethnicity, gender or sexuality.

“We can disagree without harming or belittling each other, and we can have our say without racist, bigoted attacks. We should also be able to make our points without resorting to misinformation and misleading political ads – something we’ve seen far too much of already this election.”

Read the article by Steve Evans in The Canberra Times.