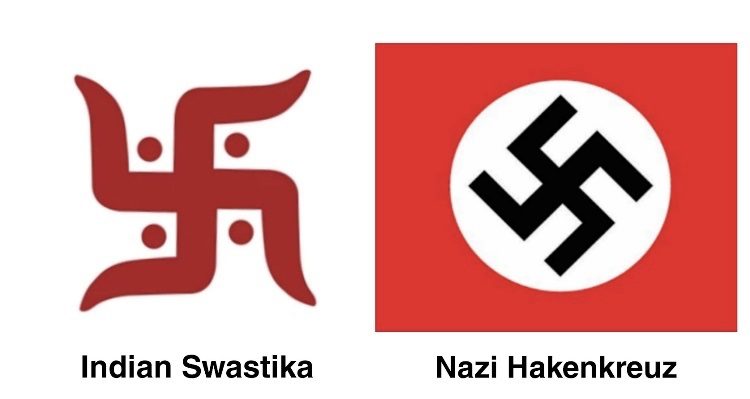 A Visual Comparison of the Indian Swastika and the Nazi Hakenkreuz

The phrase “anti-Semitic and fascist symbols including swastikas” was amended to “anti-Semitic, fascist, and neo-Nazi ideology.”

The swastika is a living enigma that displays auspiciousness, wealth, good fortune, the sun, the circle of life, and other things. The emblem has both auspicious and ornamental meanings. There are a variety of viewpoints regarding its origin, functions, meaning, and elucidations. It may be traced throughout the Indian subcontinent, from prehistoric periods through the Indus Valley and Saraswati civilizations.

The swastika symbol holds the highest spiritual significance for Hindus, Buddhists, and Jains. The importance of Swastika became more prominent around the Indian subcontinent as Buddhism expanded. It moved westward through Afghanistan, then eastward across Central Asia to China, Korea, and Japan. Another path it took was to China around 1800 BCE, then to Korea in 37 BCE, and finally to Japan in 538 BCE (Kant A.K. et al., 2016, Diversity of an ideogram: A Case of Swastika in the Eastern World).

Despite these facts, the Nazi insignia, which was originally known as the Hakenkreuz (“Hooked cross”), was substituted with Swastika in early English translations of Adolf Hilter’s “Mein Kampf,” popularising the phrase “Nazi swastika,” and, thus, confusing the two concepts. As a result, Swastika, an Indian sign of peace and auspiciousness, became erroneously connected with Hitler’s preposterous Aryan supremacy theory.

Read the article in The Australia Today.