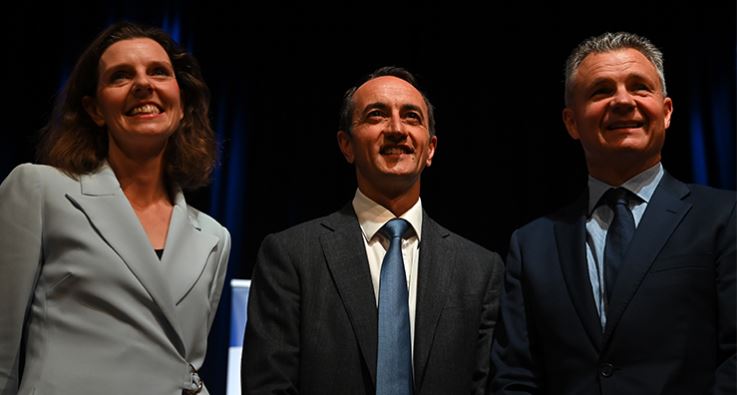 Through the heavy-duty gates and past the guard and then up the stairs littered with Israeli flag bunting. We’re heading to the Moshe Triguboff Auditorium at the Moriah War Memorial College, where Allegra Spender and Dave Sharma will come together for a debate organised by the NSW Jewish Board of Deputies, the Executive Council of Australian Jewry and the Australasian Union of Jewish Students. Labor’s Matt Thistlethwaite is joining them from neighbouring electorate Kingsford Smith, and appears to be a third wheel for the Wentworth title fight, but he’ll prove his mettle later on.

Sadly, the hall is only about half full, leading to a decided lack of atmosphere. Audience members are asked to submit questions online, with a piece of paper available for the less tech-savvy. The only audience interaction or moment of levity is when one attendee rails at Sharma that he’s still paying $2.19 a litre for petrol, prompting Sharma to offer to share his petrol station itinerary so he can fill up cheaper.

But it’s Israel first. We don’t even need to get to the questions for that, because Spender — or “Holmes à Court-backed candidate” as the Daily Telegraph insists on calling her, because female independents apparently can only be defined in terms of a male — wants to hit back at a News Corp smear campaign suggesting that because she received advice from Blair Palese (who supports the Boycott, Divestment and Sanctions (BDS) movement) she’s anti-Semitic. In fact, Spender insists, she’s a strong supporter of Israel, and talks of its 3000-year connection to the land, the need for it to be strong, and her opposition to BDS. Indeed, this is not a debate to be arguing over whether BDS is anti-Semitic, let alone anything more controversial.