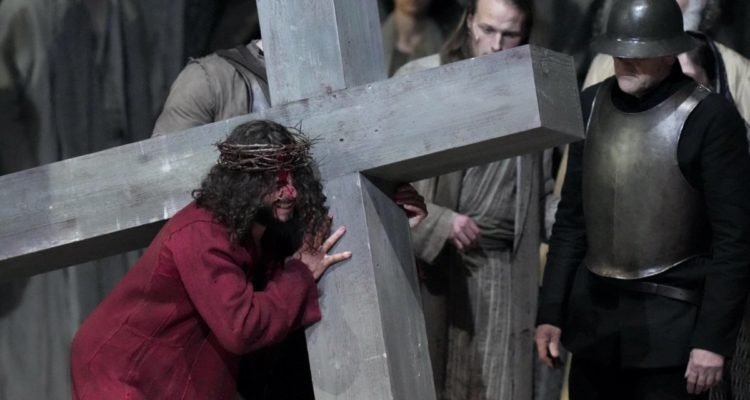 Rochus Rueckel as Jesus performs during the rehearsal of the 42nd Passion Play in Oberammergau, Germany. (AP Photo/Matthias Schrader)

Passion plays originated in the Middle Ages in Christian Europe as a way to celebrate and teach the story of the last days of Jesus’ life and from the beginning embodied the anti-Judaism derived from the depiction of the Jewish religious authorities in the Holy Week Gospel readings. Passion plays regularly triggered anti-Jewish violence by repeatedly affirming in the minds of Christians and others who viewed Passion plays the powerful spectacle that Jews are devilish, manipulative, legalistic and blood-thirsty Christ-killers.

With the post-Holocaust transformation of Christian attitudes toward Jews and Judaism, Passion plays began to change for the better. Jewish caricatures were increasingly challenged on both historical and theological grounds, and the shows have de-emphasised the role of Jewish figures and the idea that blame for Jesus’ death lay on the Jews as a people.

But change came very slowly to Oberammergau, Germany, home to the best-known Passion play, which resumes this week after a delay caused by the coronavirus pandemic.

Oberammergau’s play has been presented once every decade since 1634 to fulfill a sacred vow made by its plague-ravaged residents. Often viewed in person by half a million pilgrims, the Bavarian version is regarded around the world as the genre’s gold standard.

Read the article by Noam E Marans and Peter A Pettit in Sight Magazine.