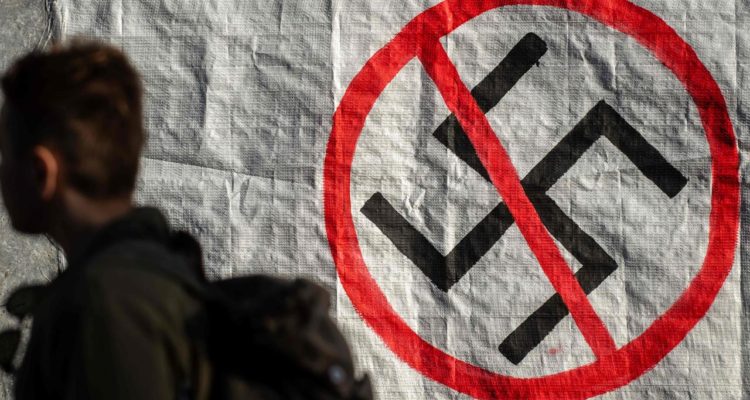 Public display of the Nazi swastika will be banned in Victoria. (Angelos Tzortzinis / AFP)

The Proposed Ban of the Swastika in Victoria

Liberty Victoria is deeply worried by the emergence of far-right extremism, but opposes the ban of the ‘hakenkreuz’ for the reasons set out in our joint submission to the Commonwealth Parliamentary Joint Committee on Intelligence and Security (PJCIS).

We understand that the display of Nazi symbols is highly confronting and offensive, particularly to the Jewish community and other minority groups that have been targeted by Nazi ideology. We also recognise that the introduction of this new criminal offence is intended to convey the Victorian community’s strong condemnation of racism, and to express solidarity and support for communities that have been targeted by racial vilification. These are laudable aims.

Our concern, however, is that the expansion of the criminal law is not an appropriate or effective way to achieve these objectives. There is a risk that the law will have unintended consequences which undermine its objectives.

Critically, several features of the offence as drafted erode fundamental protections for people accused of criminal offences, and risk exposing legitimate religious, educational or artistic uses of the swastika to scrutiny by police. If enacted the bill: (1) will allow a person to be convicted and exposed to a risk of imprisonment on the standard of what they ‘ought’ to have known (rather than what they did know), and (2) will place a reverse onus (likely to be on the balance of probabilities) on an accused person to make out a defence (such as religious belief, academic work or artistic expression).

This unravels the ‘golden thread’ of the criminal law of the presumption of innocence and means that an accused person could raise a reasonable doubt about whether they had intended to use the symbol for a legitimate reason but still be convicted and exposed to the risk of imprisonment because they did not establish the defence on the balance of probabilities. Concerningly, it appears that these aspects of the proposed offence have been chosen to make prosecution easier, notwithstanding that in other contexts reverse onus provisions have been found to be unjustifiable and contrary to the Charter of Human Rights and Responsibilities Act 2006 (Vic).

Read the submission by Michael Stanton, President of Liberty Victoria.