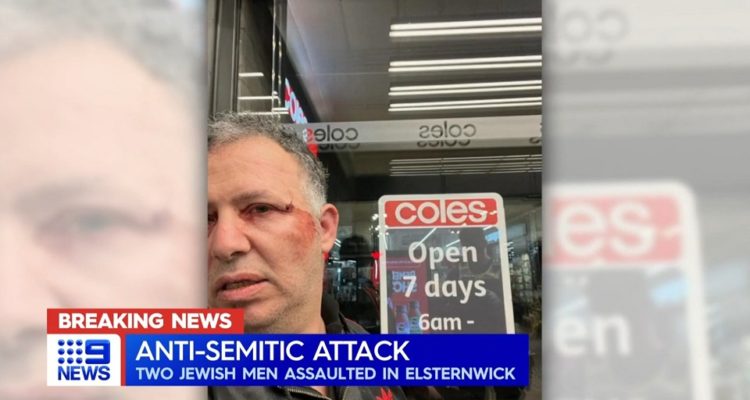 Police are investigating a potentially anti-Semitic attack on two Jewish men outside a supermarket in Melbourne’s south-east which left one of the victims in hospital.

Yacov Gozlan told The Age he was leaving the Coles supermarket near the corner of Glen Huntly and Orrong roads in Elsternwick about 10.30 when he saw someone allegedly attacking an Orthodox Jewish man.

“He was holding the religious man’s hat behind his back and pushing him back with the other hand towards a transit van,” Gozlan said.

“I said to him ‘I’m Jewish, he’s Jewish, leave us alone’, and he started bashing me straight away.”

The 50-year-old says he ran inside the supermarket, where the assault continued. Gozlan alleges he was gouged in both eyes during the altercation, which left him with severe bruising and lacerations. He spent Sunday evening at the Austin Hospital.

A Victoria Police spokeswoman confirmed a 33-year-old man was arrested at the scene and was assisting police with enquiries. No charges have been laid.

“A 50-year-old man stepped in to assist after witnessing another man being allegedly subjected to anti-Semitic abuse. Upon doing so, the man was allegedly then punched and knocked to the ground by a 33-year-old man,” the police spokeswoman said.