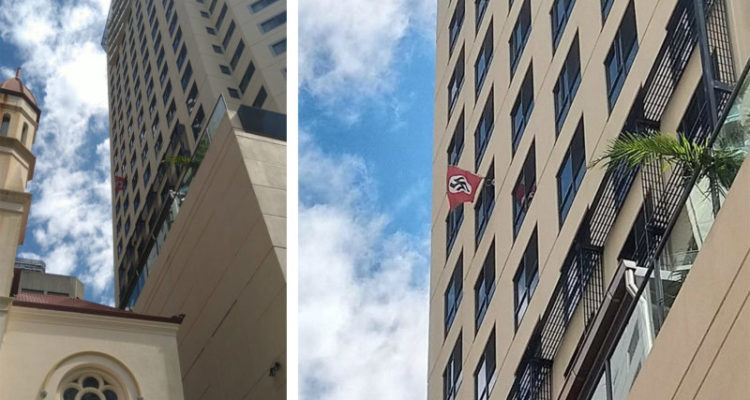 A 45-year-old Brisbane man has been handed a notice to appear in court for public nuisance over a Nazi flag flown above the Brisbane Synagogue on Saturday.

To display hate symbols such as swastikas would be a crime in Queensland under a suite of recommendations from a recent governmental committee inquiry into serious vilification and hate crimes.

“As a community, we cannot tolerate the deliberate use of these symbols to promote hatred towards communities that have been persecuted and cause those people fear,” Attorney-General Shannon Fentiman said.

“We are committed to a Queensland that is harmonious, fair and inclusive, not one where individuals or groups are vilified based on their race, religion, language, ethnicity, nationality, sexual orientation or gender.”

The move comes after several high-profile displays of such symbols, including the flying of a Nazi flag over the Brisbane Synagogue in October, and amid pushes to ban them nationwide.

The Victorian government introduced nation-leading legislation to parliament this month.

Fentiman said her government hoped to do the same in the second half of 2022 after consultation with legal and community stakeholders.

The laws would allow swastika symbols to be used in some religions they feature.

In Victoria, the proposed penalties for those caught intentionally displaying the Nazi symbol in public — including in graffiti — would be up to 12 months in jail and a $22,000 fine.

Read the article by Matt Dennien in The Brisbane Times.