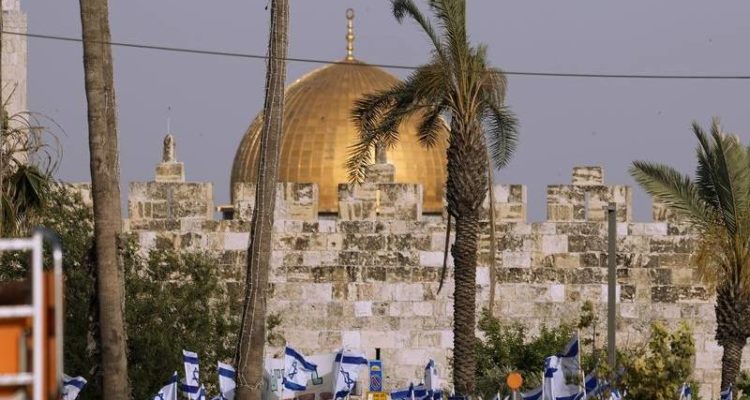 The Jerusalem Day procession celebrates Israel's capture of the Old City in the 1967 war.

Thousands of flag-waving Israeli nationalists have marched through the Muslim quarter of Jerusalem’s Old City in a deeply divisive parade that Palestinian factions warned could re-ignite their conflict with Israel.

Police earlier fired stun grenades at Palestinians who pelted them with stones in the al-Aqsa mosque compound as record numbers of Jews visited the holy site, some of them appearing to pray in defiance of a long-standing ban.

The annual Jerusalem procession celebrates Israel’s capture of the Old City in the 1967 Middle East war and draws thousands of cheering, chanting participants to its narrow, stone streets.

“Death to Arabs,” some youths shouted as they entered Damascus Gate, the main entrance to the Old City’s Muslim neighbourhood.

“An Arab is a son of a whore,” one small group yelled out in front of Jerusalem’s ancient walls.

Ahead of the march, police said 2600 Jews toured al-Aqsa esplanade, a record number for a single day.

Some of the visitors wore religious garb and prostrated themselves.

A few held up Israeli flags and sang the national anthem.

The preacher of the mosque, Sheikh Ikrima Sabri, denounced their behaviour.

“What happened today in al-Aqsa mosque hadn’t taken place since 1967,” he told Reuters, accusing the government of deliberately looking to escalate tensions.

Read the article by Crispian Balmer and Amar Awad in The Canberra Times.